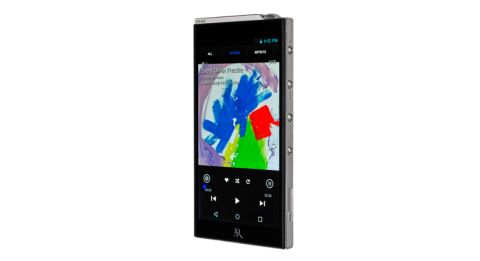 A £900 high-resolution music player that looks and sounds like a premium hi-fi product? Meet the Acoustic Research M2.

This portable player’s all-metal construction is eye-catching, but it’s the superbly detailed and authoritative sound quality that really gets us excited.

Portable music players (either standalone players or smartphones) don’t always deliver that meaty, powerful bass depth you get with dedicated hi-fi kit, but the M2 comes admirably close. There’s a hugely satisfying weight to its performance.

We launch the pre-loaded AR Music Player and dive straight in with a 24-bit/192kHz FLAC recording of Hans Zimmer’s Gotham’s Reckoning – and are blown away by the sheer power and muscularity of the M2. Zimmer’s signature strings and percussions boom menacingly, with the low-frequency notes reaching incredible depths.

It conveys space and dynamics with great panache, too. The sense of build up is palpable, and the eventual crescendo hits you like a wall of sound.

What’s all the more impressive is that it isn’t just a block of noise. The M2 is controlled and discerning enough to convey the texture of the strings and the rich layers of harmonies surrounding each drum hit.

It piles on the punch and power without ever missing a step when it comes to rhythmic precision.

Muse’s Supremacy is a rousing performance in 24-bit/96kHz, with basslines taut and rumbling, guitars crunchy and attacking, and every element working cohesively to deliver the most enjoyable and faithful performance.

Switch down to a CD-ripped WAV file, and the same characteristics apply. Each nuance and inflection of Nina Simone’s voice is laid bare in Feeling Good, but there’s plenty of space for the instruments to breathe.

But here, the gusto delivery can sometimes be too relentless, and we wouldn’t mind a touch more delicacy with the way it handles gentler pieces of music.

You’ll hear a drop in detail and clarity when playing MP3s, but the M2’s enthusiasm and delivery remains consistent. It performs best with well-recorded high-resolution files, but isn’t a complete write-off with anything less than CD-quality.

Acoustic Research has put just as much effort into the design of the M2. Crafted out of solid metal in contrasting black and silver finishes, the build quality is excellent and leaves you in no doubt that you’re holding a premium product.

It’s a solid, hefty player, and though considerably thicker than any current flagship smartphone, we have no trouble wrapping our hands around it.

The volume wheel on the top right edge gives the M2 a distinctive look. It’s a nice touch that’s sure to please the audiophiles (it’s an ALPS potentiometer, in case you’re interested).

The wheel is easy to use, and responds instantly to the slightest scroll. If anything, it’s a touch too sensitive, and gets easily nudged when placing it in your pocket or bag.

The buttons too – nicely machined as they are – are spaced in a way that we keep accidentally pressing ‘skip’ whenever we grip the player too firmly. Not an issue when you’re using it at your desk, but a little annoying when you’re on the move.

As a portable player, the M2 could have been fine tuned just a little bit more – the volume wheel could have a stronger resistance, for example, and we would’ve liked the SD card slot tray to snap shut more securely.

At the bottom edge of the M2 you’ll find a 3.5mm headphone output, a single analogue line out to connect the player to your existing hi-fi system, and a USB port for charging the device.

A velvety pouch is provided so you can carry the M2 in your bag and protect that expensive finish from any marks or scratches.

The M2 comes with 64GB of internal storage. It’s enough to start with, but you’ll soon find that space filling up once you start adding high-res albums. However, there is an expandable microSD slot, so you can boost the storage.

File compatibility is the best we’ve seen in a high-res player. Not only does it play all the popular formats – FLAC, WAV, ALAC, AIFF, MP3 – it also supports DSD (64 and 128) and DXD. Inside, there’s a high quality Burr-Brown PCM1794a DAC that handles files of up to 24-bit/192kHz.

The 5in touchscreen has a resolution of 720 x 1280 pixels, with album artwork looking crisp and clear. The playback controls in the AR Music Player app have sharp edges, contrast is strong, and there’s no screen noise.

The player runs on a very basic version of Android 4.3, which gives you a degree of familiarity when you first fire up the M2 player. The settings, pull-down notification bar and app drawer are all there, but you won’t find Google Play Store nor any other features that encourage multimedia use.

Acoustic Research has stripped it bare to ensure sound quality isn’t compromised, bypassing the entire OS to create a dedicated lossless path straight to the proprietary Music Player app. The interface is sparse, but it’s neat, fast and easy to use.

However, the interface isn’t as smooth and fast as Android can be. There’s a slight judder when scrolling through the music list, and the home screen’s widgets linger for a split second too long in the background. Small hiccups, maybe, but hopefully they will be ironed out with future software updates.

The M2 has wi-fi and a web browser, so you can surf the internet while listening to music.

In the absence of the Play Store you can download and install APK files from streaming services like Spotify onto the M2. Otherwise, transferring files from your laptop is a simple case of drag-and-drop.

The M2 will reportedly last around nine hours on a full charge. That’s comparable to an Apple iPhone, though not as impressive as Sony’s claimed 32 hours for the NWZ-ZX1.

In our experience, the M2 lasted two long commutes of full music playback, with plenty still left over at the end of the day.

This is the first portable music player we’ve tested at this price. Sony’s NWZ-ZX1 was a smartphone-competitive £550, but the Acoustic Research M2 is in a different league.

But the £900 price tag is not without justification.

There are a couple of issues with the interface and design which mean the M2 doesn’t quite deliver the perfect, seamless experience.

But there’s no denying it’s the best sound quality we’ve heard. If you’re after a premium product that will do justice to your high-resolution music collection, you really need to listen to the M2.