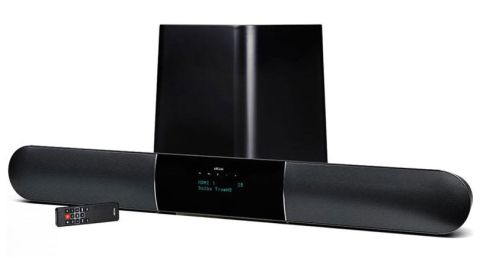 An ambitious piece of kit that almost pulls it off

There’s more than one way to skin a cat, or in the case of home cinema, use a soundbar. One way is to plug your sources into your TV and have just one digital cable running from the back of your set into the unit.

The other approach is one taken by Arcam and its first ever entry into this market: the Solo bar. The British company has used its experience in home cinema to transplant some of the brains and features of a surround-sound receiver into its new creation.

So the Solo bar has a number features you expect to see in a home cinema amp and a couple of surprises thrown in too: four 4K-supporting HDMI inputs. The Arcam’s HDMI output is also ARC (Audio Return Channel) enabled, so it can accept audio from compatible TVs.

Cycle through Arcam’s menus and you’ll find ‘Auto Setup.’ Like some surround-sound amps, the Solo bar comes with a microphone and automatic-calibration software. Hit ‘ok’ on the remote, the bar fires out a few test tones and the levels of the speakers in the bar are adjusted accordingly. When it’s connected, the bar does the same for the optional wireless Play subwoofer too.

There’s no on-screen GUI (graphical user interface) for the Solo bar, everything’s done through the display on the unit. It’s reasonably large and fits in a decent amount of information, although the pale blue characters look dated compared to the dark green ones on other Arcam kit.

Once the soundbar has been calibrated you still have the option of switching the EQ off, and you might want to experiment to see what you prefer. With it on, we find the Arcam sounds more airy and open. Turn it off and you sacrifice some of the spaciousness but gain more solidity at the bottom end.

You also have three different sound modes to work with: ‘Movie’, ‘Concert’ and ‘Stereo’. ‘Movie’ gives a broader spread of sound, while the other two give varying degrees of focus. Play music through the Arcam’s Bluetooth receiver and the system defaults automatically to ‘Stereo’.

Talking of Bluetooth, the Arcam allows you to go wireless, but with a significant twist. Not only can you beam music to the Solo bar the traditional way, but you can also transmit sound from it to a pair of Bluetooth headphones.

It’s a clever touch and something we haven’t seen in a soundbar before. Bonus points to Arcam for thinking outside the box... or should that be outside the bar?

The bar itself is quite a substantial unit, with a solid, aluminium chassis. To all intents and purposes it’s a pair of speakers with 50W per channel. The tweeters at either end of the bar are angled out, at five degrees each, to enhance the width.

There’s a bracket for wall-mounting bundled in the box too. Since the first shipment went into stores, Arcam now supplies wedge-shaped-feet that slot under the soundbar and help angle it upwards, which is useful if it is at a much lower level than you are seated.

Besides the smart use of Bluetooth, another plus point for the Arcam is its ability to decode the high-quality Dolby TrueHD and DTS-HD Master Audio soundtracks found on Blu-ray discs. The majority of soundbars on the market tend to only take the core DTS and Dolby soundtracks off a disc so, theoretically, the Arcam is digging out more information than many of its rivals.

In reality, movie soundtracks beam out of the Arcam loud and clear, and there’s an impressive level of transparency across the board. Soak up the action from the DTS-HD Master Audio soundtrack to After Earth, and you’re aware of the bar’s even tonal balance.

Voices are just as audible and lucid as the action. Just before Kitai sky-jumps off the waterfall there’s a ton of detail in the heated exchange between Jaden and Will Smith. As the young hero tries to avoid the giant bird of prey, there’s a real sense of punch and precision, as bird and boy swoop and jostle.

Where the Arcam doesn’t quite succeed is in drawing you into the film, as it doesn’t really convey the dynamics or drama of the movie as well as it could. As the camera pans and streams merge into the waterfall, rival soundbars, such as the Dali Kubik One or Focal Dimension, give more of a sense of the rushing water and the power of Mother Nature as it cascades over the edge.

There’s greater richness and finesse to the sound too. Dialogue sounds that bit more natural and emotional.

Playing Stevie Wonder’s Live At Last Blu-ray, the Arcam shows it’s able to deliver music with poise and precision. During Superstition percussion stops and starts in all the right places. The saxophone has a distinct tone, but it doesn’t sound edgy or hard enough.

It’s easy enough to listen and isolate all the different elements of the track. We just aren’t excited enough, and the normal upbeat funk of this classic tune doesn’t register as much as it does when heard through more capable rivals.

They offer greater weight and richness in the bass and greater dynamic thrust. The story continues when you switch to simple streaming of music via Bluetooth. Complex rhythms don’t present a problem and there’s nothing wrong with how the Arcam organises music. But nonetheless you still yearn for greater finesse and sonic artistry.

Arcam has been very ambitious with the Solo bar, and in some ways it goes above and beyond what we’ve come to expect from this kind of product.

But when it comes to sound quality, the Arcam doesn’t quite cut it against the very best.