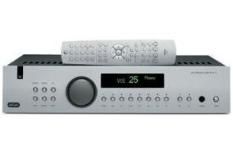 Given Arcam's reputation this should have been a class leader. It isn't

Does this amp look familiar? We're not surprised. This is our second review of Arcam's luxury integrated amplifier. The original test was done back in our July 08 issue where the A38 failed to inspire us, scoring just three stars.

Arcam's reputation is built on great sounding, sensibly featured kit, sold at a fair price. This amplifier's fine build and comprehensive specs – 100 watts per channel, five line level inputs and two tape loops – upheld at least part of that tradition. However, when it came to sound, things fell apart.

The word 'bland' appeared quite prominently in the original review, and rightly so. That original sample simply failed to shine, taking the sparkle out of all kinds of music. Clearly, not the kind of result expected from a £1200 stereo amplifier.

Our original sample wasn't quite right
Arcam checked over the amplifier and found it wasn't quite right. It wasn't faulty as such, but there were various adjustments on the power amplifier section that were on the opposite limits of the passable tolerances.

It turns out this isn't good for sound, and Arcam has added another test procedure to production to make sure this kind of thing doesn't happen again.

So, we have the A38 back, and in fact it's the same amplifier we reviewed originally and everything inside is adjusted properly. And yet the result is still disappointing.

Yes, this amplifier now sounds better than it did before. It's cleaner, punchier and decently detailed. The tonal balance is as even as it always was and stereo imaging is pleasingly precise.

But when it comes to dynamic expression, timing precision and just, well, entertainment, the A38 is as far behind class leaders such as the Roksan Caspian M-series as it's always been. This isn't an amplifier that keeps you awake late into the night listening to music. It does the hi-fi things well enough, but when it comes to communicating the music's message there are far better options around. So it remains at three stars.