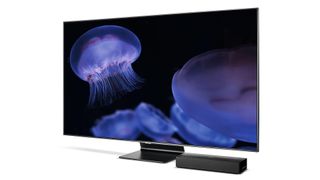 While every other manufacturer continues its obsession with OLED, Samsung is resolutely sticking to its QLED (Quantum dot Light Emitting Diode) guns. And who can blame it? QLEDs are brighter, more vibrant and longer lasting than their OLED rivals.

But even if you’ve decided that QLED is the TV technology for you, there’s still the question of which QLED to buy. A couple of TV manufacturers (Philips and HiSense) have announced Quantum Dot ranges, but nobody's pushing the technology and TVs more than Samsung, and its 2019 range includes no fewer than seven different QLED models, each available in a variety of sizes.

So, there's plenty of choice, but what are the differences? And which should you buy?

At the top of Samsung’s 2019 range is the Q950R 8K model. Available in 55in, 65in, 75in and 82in versions, it’s specification is very similar to that of the Q90R flagship 4K model, but with a higher peak brightness rating (4000nits rather than 2000nits) as well as all of the extra pixels necessary for native 8K.

The Q90R itself represents the current pinnacle of Samsung’s 4K QLED tech. Direct Full Array Elite means the backlight has in the region of 500 (Samsung won’t be more specific than that) individual dimming zones for greater contrast, the 2000nit peak brightness rating means its significantly punchier than any OLED, and Ultra Viewing Angle means colours stay vibrant and blacks deep almost regardless of where you sit in relation to the TV.

The Q85R is an attempt to bring much of the Q90R’s qualities within the reach of more buyers. Peak brightness is reduced to 1500nits and there are far fewer dimming zones, but this is still a much brighter TV than any OLED and you do still get the Ultra Viewing Angle tech.

All of the models mentioned so far feature Samsung’s One Connect concept, which sees all connections moved to a separate box that’s connected to the screen using a single, almost impossibly thin cable. Drop down to the Q80R and the One Connect box is gone, but otherwise this is (according to Samsung) the same TV as the Q85R.

Next up is the Q70R, which loses the Ultra Viewing Angle feature and is reduced in terms of peak brightness (which is rated to 1000nits) and dimming zones (which are said to be about half those of the Q80R). Predictably, it’s a good deal cheaper than the models above. What’s more, it’s available in a smaller size, with a 49in model on sale. Remember, there are currently no OLED TVs smaller than 55in.

The Q67R and Q60R swap the direct backlights of the more premium QLEDs for edge backlights, which reduce set thickness but also result in a comparative loss of peak brightness and contrast control.

Every model in the range gets the same, excellent operating system with its abundant streaming apps (including, now, Apple’s iTunes), Ambient mode and voice control via Google Assistant, Amazon Alexa and Samsung’s own Bixby.

The price difference is a fair bit smaller than it was when Samsung launched its 2018 8K sets, but you’re still looking at a £1200 premium to upgrade from a 65in Q90R (£3799) to a 65in Q950R (£4999). Consider that there’s still no proper 8K content available or even a vague date that it might appear on streaming services or discs, and that doesn’t instinctively look like money well spent. Still, those with big budgets might want to spend the extra for a bit of 8K future-proofing.

One final word of caution, though: we haven’t yet tested the Q950R, and while it should simply be a brighter, 8K version of the brilliant Q90R, last year’s 8K model (the Q900R) was actually weaker than its 4K sibling (the Q9FN) in a couple of ways, making it the poorer choice overall. We hope to be reviewing the Q950R very soon.

If you’ve decided to stick with 4K for your next TV, you might be wondering whether you really need to buy the flagship Q90R or would be better off saving yourself some money and buying the next model down, the Q85R.

Having tested both models and considering the current price differences, we’d suggest that you’re best off spending the extra money and buying the Q90R. The premium isn’t insignificant (£500 at 55in, £800 at 65in), but the Q90R’s punchier, more dynamic picture is absolutely worth paying for.

If you’re looking for a premium TV that’s smaller than 55in, your options are more limited than you might imagine - no-one makes an OLED that small, for starters. Thankfully, Samsung does make QLEDs below 55in, although they’re a fair way down the range.

We’ve not yet tested these models but the direct backlight should bring with it a number of benefits, particularly in terms of punch and contrast, and in theory at least it’s probably worth the extra £500 if you can afford it. We’ll be testing Samsung's 49in models as soon as possible and will update this piece once we’ve delivered our final verdicts.

Those looking for a 43in QLED don’t have a choice: it’s the Q60R or bust. The QE43Q60R will set you back £799, which is fairly steep for a TV this size, but the quantum dot tech should give it an advantage over many rivals. We’ll be testing it soon to find out.

If you're not already set on a QLED TV, you're probably wondering whether an OLED makes more sense. The answer, unfortunately, isn't straight forward.

The best OLED around is the new LG C9, and while it isn't as bright or punchy as the Samsung Q90R, it does go even blacker, is dynamic in its own right, and is effortlessly natural. What's more, it's cheaper - £500 so if you're looking at the 65in version of each model. That's just enough to sway us towards the C9, but it really is a close call.

For what it's worth, the C9 is absolutely better than the Samsung Q85R, which is similar on price.

Of course, if you're after a TV smaller than 55in, an OLED isn't an option.