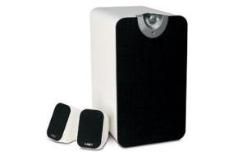 Class-leading in its day, but the Aego M-System is no longer top dog

This system used to be a favourite of ours – that's why it was a 2006 Award-winner. So why the drop to three stars?

The answer lies in the fast-changing standards among desktop speakers. This likeable package is as good as ever, but the standard has risen so sharply it's been overtaken.

It consists of two tiny satellite speakers (handy if you're short of desk space), and a more sizeable sub, with a
line-in, a volume control and a three-stage bass switch.

Yesterday's system
It performs well, with a punchy and dynamic sound. Considering the size of the satellites, the system integrates well, though it doesn't offer anywhere near the midrange realism of the best of its newer rivals. Still, it goes very loud, and the treble is sweet and controlled.

Since this was launched, new systems like those from Audioengine and Lars & Ivan have taken the ‘desktop' system closer to true hi-fi than we would have thought possible. A fine system in its day, but a little dated now.