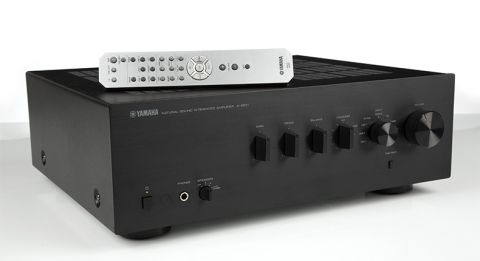 The A-S501 is a pretty good amplifier, but it’s up against some extremely formidable opposition that it can’t match

That appearance has hardly changed from its much-liked predecessor, the A-S500, something we’re perfectly happy with.

The new amplifier also feels solid, and the controls work with a crisp precision that little else can match at this price. We even like the remote handset; it’s simple and nice to use.

Unlike many rivals, the A-S501 gives the impression of a product that will last for years.

Along with fine build you’ll find a useful range of features. There’s a plentiful supply of line level inputs (five in total), a moving magnet phono stage, headphone output and a pair of digital inputs. The addition of digital inputs is the big change from its predecessor.

The A-S501 has both optical and coax connections, both capable of supporting 24-bit/192kHz music streams.

We would have liked to see a USB alternative, just to make connecting a computer easier, but it’s no deal breaker. Yamaha see this amplifier being used with a TV or Blu-ray player rather than a computer, if the information pack is anything to go by.

The amplifier is stereo and doesn’t decode Dolby Digital or DTS of course; the source will need to convert it to PCM before hand.

It’s got an adjustable loudness control too, which is unusual. People’s hearing shifts in its sensitivity of frequency extremes as volume levels change (and the tonal balance of a typical speaker changes with volume too).

This loudness control is designed to compensate for those changes by readjusting the balance of bass and treble. It works, and is well worth a try.

Bluetooth? There isn’t a Bluetooth receiver built-in to the A-S501 but you can get an outboard unit from Yamaha called the YBA-11, which costs around £50. A USB connection (DC only) on the back of the amplifier supplies the power to make it work.

It’s only when we get to sound quality that we get less than wholly positive about this amplifier. Our first impressions are good. This is a more muscular sounding unit than its predecessor. Its presentation is robust and tonally more even.

The old A-S500, for all its appeal, had a rather lean and bright balance. In contrast this new one is better balanced.

It goes decently loud too, as power output of 85 watts per channel suggests. We tried the A-S501 with a range of speakers starting with Wharfedale’s excellent Diamond 220s right the way up to our reference ATC SCM50 and it drove every one as well as we could expect.

We start with Bob Marley’s Exodus and are pleased with the amount of detail this Yamaha uncovers. Its presentation is clean and clear with plenty of weight to the hard charging bassline.

Marley’s vocals are suitable expressive and we like the sense of space the Yamaha imparts. It’s less successful at delivering the driving rhythm though, underplaying the quality enough to take some of the excitement out of the music.

Moving to something more complicated such as Danse Macabre from Saint-Saëns and the Yamaha delivers mixed results. There’s good detail resolution and a fine sense of scale from the amplifier.

We’re impressed by its expansive sound stage and its ability to populate the image with well-defined instruments.

However, the A-S501’s composure falters a little when things get complicated. It starts to sound just a touch confused, losing track of subtle instrumental strands as the piece really gets going.

Let’s make this clear; it doesn’t fall apart, more that the sense of control and stability is diminished as if the amplifier just can’t quite keep up. In direct comparison something like Marantz’s PM6005 sounds much more settled and confidant. Dynamically it’s a more exciting listen too.

Overall the Yamaha A-S501 is a capable amplifier. It’s built very well and is packed with useful features.

The move to a more balanced sound is welcome but compared to the best at the price it falls short of enthusiasm and a little composure. It’s worth considering but is overshadowed by the class best.