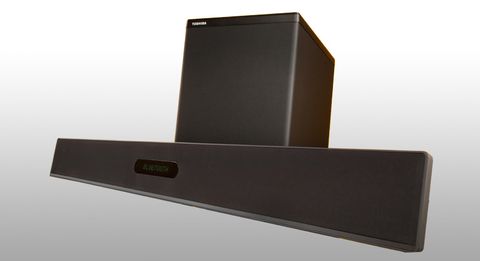 A good sound at a decent price: that’s the Toshiba’s promise, and it’s one we like

This Toshiba is just the ticket for those looking to take the first step in boosting their TV’s audio. It offers everything from a decent sound to good connections, and for a price that’s easy on the pocket.

It has a smart, compact design, too. The SB3950M1 has an understated look: much sleeker and cleaner than the Toshiba SBX4250 we saw earlier in the year.

The bar has a cloth front – hiding four 6cm drivers – with a plastic, oblong display. We’re fans of the bold green-on-black text: clearly readable even in bright conditions and from a distance, and the spelling out of commands makes the bar easy to use. The display also eliminates guesswork by displaying ‘paired’ when the Bluetooth connection is complete, too.

Our only qualm is with the bar’s size. Its slim body (only 6cm deep) is practical for those without much space in front of their TV, but its 9cm height can block the bottom of screens. The wireless sub has a down-firing 18cm subwoofer, and though is a little on the chunky side too, its basic matte-black casing doesn’t highlight its size.

There are generous connections: two HDMI inputs join the standard 3.5mm and optical sockets, while a Bluetooth connection is a mere tap of a device on the bar thanks to near-field communication (NFC). There’s also the bonus of a HDMI output, which means sources can be plugged straight into the bar’s inputs, with only one cable running out to the TV.

The remote isn’t the usual credit card-style, but a solidly built and well thought-out one. It’s a simple design, with a logical, button layout, and has a ridge at the back where your index finger naturally rests.

But the cornerstone of the SB3950M1 is its performance. Don’t let the bar’s slim body fool you into thinking it can’t flex some muscle: it can go loud and the sound is solid.

With action thriller Hanna, the Tosh gets right into the thick of it. Punches are full-bodied, swinging iron doors have weight, and there’s sufficient heft to trucks as they race over uneven ground. The sub is well integrated too, working hand-in-hand with the bar to bring brunt and force to car crashes.

You get a lot of bang for your buck. Voices are projected with clarity and focus: there’s distinction between echoing voices inside the holding cell, and the muffled ones speaking through the tannoy outside – something that’s significantly less apparent through our reference Sony KDL-40W605B. Turning our attention to daytime TV, and presenters sound clearer and more insightful than through any TV speakers.

On the negative side, the SB3950M1 can be pushed to being a bit hard in the treble – rubble that flies up under the car sticks out a little – and it doesn’t have the punch or crispness in the midrange of some of its rivals. But overall it’s a very listenable sound and a definite step-up from a TV sound.

A few EQ modes (‘Music’, ‘Movie’ and ‘Game’) are available on the SB3950M1 – we prefer ‘Music’ for its even-handed delivery, while ‘DTS TruSurround’ widens the soundfield for a more ‘immersive’ experience, and ‘DTS TruVolume’ flattens dynamics to make night time viewing possible without disturbing the kids or neighbours.

When it comes to music, the SB3950M1 is up to standard for budget soundbars. Stream songs over Bluetooth and there’s detail, balance and drive. It draws clarity from the droning bass and distortion in alt-J’s Every Other Freckle, although it doesn’t have the dynamics or rhythmic skill to set your heart on fire exactly.

All soundbars pledge to be a step-up from your TV’s sound but not all deliver – especially at this price. This Toshiba does: it nails the basics in sound quality, and has user-friendliness.

We’d like a little more punch, and refinement at the top end, but ultimately the Toshiba gets a whole lot right, for so little cost.