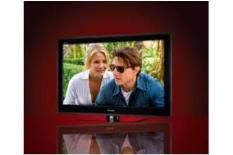 If you've read our review on Toshiba's budget 40 inch 40RV753 you'll not be surprised to find that the 40WL753 trumps its sibling considerably in terms of features.

Here, you get LED edge backlighting instead of old-school CCFL. 200Hz motion processing has been added, too, along with YouTube support. It's also got more sophisticated looks, a thinner profile, and a new remote control.

A more in-depth set-up process
What hasn't changed is the menu system, which still boasts that garish, luminous highlight – and with those extra and more advanced features, you're going to have to spend a bit longer looking at them as you wrangle the best picture out of your new display.

In the interests of speeding this up for you, the AutoView mode should definitely be turned off here.

Pop test-favourite Harry Potter and the Order of the Phoenix into a connected Blu-ray player and there's a problem before the film even starts: blotchy backlighting.

Without mentioning any names (hint: it starts with an ‘S' and ends with a ‘y'), we have seen worse clouding in the past, but this is comfortably the patchiest we've seen in a good while, and as the logos fly out from the dark, it creates enough of a distraction to dampen the drama.

When the film starts proper, the backlighting becomes almost unnoticeable, and you can concentrate on the two now notoriously challenging bits of motion in the first scene.

Smeary horizontal movement
The vertical pan over the town is handled very well, with the Toshiba managing the complicated scene below in sharp, solid and smooth style, but the horizontal movement provided by the boy leaving the roundabout is really rather smeary.

It's also worth pointing out that, like its stablemate, the 'WL753 has a tendency to overcook its colours a bit. We know the fields around the park have been scorched by a heatwave, but here they're pushed from pale, dry yellow to a less-realistic orange.

And if you manually adjust the colour balance, this results in a picture that's too washed-out.

Unsurprisingly, though, this set is an improvement on the 'RV753 in many ways. For a start, away from those patchy corners, blacks are even deeper, but there's greater punch and insight, too.

It's also far more detailed and sharp, and therefore produces a more thrilling and realistic version of the Dementors' attack.

Impressive HD Freeview pictures
The thing is, at £960 the 'WL753 isn't competing with its little brother. It's got to tackle much bigger competition from big names; and against these it's rather less impressive.

True, this Toshiba does have an impressively clean, solid and vibrant Freeview tuner, which includes lovely, sharp images from the likes of BBC HD, but when you also factor in soft DVD pictures and an audio delivery that, while reasonably clear with voices, is overall rather flat and thin, the 'WL753 struggles to garner a heartfelt recommendation.

Sure it's better than its cheaper sibling, but it's outclassed by its price rivals.