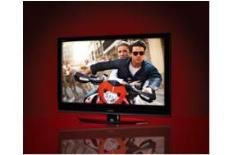 Even given the ultra-affordable price, this Toshiba’s performance can only be classed as average

Just a few years ago Toshiba's TVs, while not regular world beaters, were almost always mingling among the top spots.

These days you're more likely to see a Toshiba set fighting for the scraps left by Sony, Panasonic or Samsung.

And, unfortunately, that's exactly the situation the 40RV753 finds itself in. Mind you, the ‘RV753 does have a powerful USP: it's very cheap.

Decent looking, decent features
And it's not a bad-looking set. Next to the best, it looks rather basic and plasticky, but it's a darn sight more stylish than other big-name budget sets we've seen.

It's not disgraced for features, either, offering Full HD, Freeview HD, two USB and one ethernet connection for DLNA (but not web services). You can add a dongle to go wi-fi if you wish, too.

Turn it on for the first time and you're greeted by clear, sharp menus that are rather damaged by the ill-advised use of luminous green.

You are soon asked whether you want to switch AutoView on or off. It's worth experimenting with this, as there are compromises involved in both choices: switching it on results in greater black depth; turning it off produces more punch. In the end, we settled for the brighter, non-AutoView picture.

A lack of punch to pictures
Even with that choice, the Toshiba's presentation of the Clash of the Titans Blu-ray has deeper blacks than its closest rivals, though it can't muster the same punch.

Play the Medusa scene and the cavernous location is realistically, oppressively dark, but the torches don't pierce the gloom quite as well as they should.

It's also guilty of overcooking the colours just a smidge. This adds a touch of warmth that's not unpleasant, but also creates skintones just a touch more flushed than is strictly accurate.

Unfortunately, it also lacks any kind of advanced motion processing. So, when it comes to the regular, fast action, it really struggles to keep up, producing far too much judder and smear.

These motion issues are more evident when you switch to DVD and standard-definition Freeview, and the upscaler also introduces a bit of noise and instability to the image.

Performs best with HD material
So, it's far from a perfect performance, then, but the Toshiba does have qualities.

For one, its detail and sharpness with HD material is actually very impressive given the price, and it has one of the strongest Freeview HD tuners around, as you'll see in the insightful, composed and vibrant presentation of Antiques Roadshow.

It's got perfectly passable audio, too, with a ‘dynamic bass boost' option that does actually add some useful weight.

In the end, it comes down to what you expect from a £480 40in TV. If that's picture perfection, you'll be sorely disappointed, but if it's reasonable detail and some core features, you'll find the ‘RV753 to be perfectly acceptable.