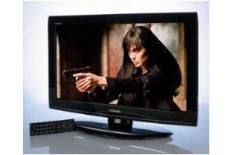 Toshiba hasn't been having a particularly good time of it recently, especially in terms of TV reviews.

All too often in recent months, we've found that the company's high-end models are a qualitative step behind the class leaders, while its budget offerings have been undercut for price.

So the company may be rather pleased with the rating for its 26AV713B – it might ‘only' be four stars, but that's still very good.

Decent punch and vibrancy
There's nothing beautiful about its styling or menu system, but it's passable in both regards, and while it has a low score for HDMI connectivity – with just two sockets, both rear mounted – we're not convinced many people need more, on what is likely to be a bedroom set.

You'll notice early on that the Toshiba has an active backlight, which slowly lights or dims in accordance with the action on screen.

These systems are ten-a-penny these days, and some are worth using (as long as you're not gaming), but the Toshiba's backlight goes too dark in dim scenes, robbing them of too much detail. A word to the wise: it's best switched off.

Even then, its portrayal of Gotham City in The Dark Knight is still a little lacking in insight, but the blacks are very impressive in their inky depth.

If there's occasionally just a little too much red to skin tones, it generally avoids unnatural warmth.

Unfortunately it's not quite as capable with DVD. Its 576i pictures are unpleasantly smeary. This can be cured by sending 576p from your player, but its blacks can lack detail, and there's not as much overall vibrancy or punch as with Blu-ray.

Detail levels are good, however, and in isolation, the Toshiba will be a fine DVD display – although there's no getting around the fact there are better options if standard-def discs are your priority.

The sound is less impressive, however, with the Toshiba throwing out comfortably the smallest, most cluttered and least distinct audio in the test.

You can add some scale and space by using ‘surround' mode, but it's still lightweight. So, a mixed bag really, but one with enough positives for it to be worth considering, especially if you find it reasonably discounted.