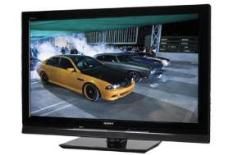 In some ways this is an improvement over the outgoing W4500, but with such irregular backlighting it can't make that fifth star

New Sony products are always keenly anticipated, and when it's the replacement for an established favourite (as this KDL-40W5500 is) excitement can reach fever pitch.

The outgoing KDL-40W4500 was our TV Product of the Year 2008 and a product we've referred to again and again over the last year – this new model has a lot to live up to.

It looks slightly tidier than the old model and, inevitably, slightly fresher. There's none of your Philips/Samsung 'super-slim' chassis nonsense here, but it's as discreet and harmonious-looking a product as we've come to expect from Sony.

TV reception, the Achilles' heel of the W4500, is improved here to the point that it's average by the standards of newer rivals. There are hints of the old coarseness when broadcast quality dips (Setanta, we're looking at you), but it's as competitive a performance as we've seen from Sony lately.

At the other end of the scale, 1080p/24fps images look splendid. Pictures are colourful and natural, with fine levels of detail retrieved and convincing skin-textures, while motion (so long a Sony specialism) is unimpeachable.

Picture noise is little more than a rumour, and contrasts are generally impressive. Sound is equally forthright and persuasive.

When we first received it, the light bleeding into the top corners almost prompted us to deem it faulty.

A week's running in calmed the problem, but didn't eradicate it – this is one of the few screens where uneven backlighting can occasionally be discerned even when the screen is displaying a picture.

That's where the Sony's fifth star has gone. We don't think our KDL-40W5500 is faulty, we just don't think the backlighting is good enough.