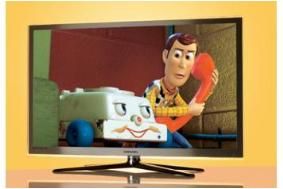 It's rash to make assumptions about TVs from the same range, but there are some things that you can take for granted here if you've already read the Samsung UE40C8000 review.

The looks, for instance. It's the same with spec and ergonomics, too: the same shiny, slightly unintuitive remote control, the same excellent on-screen menus. No, the biggest difference in the showroom is an optical illusion: the 46C8000 is the same 3cm depth as the 40C8000, but because it's bigger in the other two dimensions it looks even thinner.

A little tweaking goes a long way
There are a few differences when it comes to performance, though – and some quite early on. TV reception, for example, is just as stable, composed and detailed as with the smaller model, and there's the same fine facility with motion on show.

The 46C8000 has an altogether warmer colour balance, though, and while clean whites and deep, detailed blacks top and tail the spectrum nicely. In between, red tones are entirely too confident and green tones too rich.

If you back off the colour balance in the set-up menus just a little, skin that was too ruddy becomes wan and washed out without ever passing through ‘natural'.

An upscaled DVD has a similarly sweltering colour palette, but in every other respect the Samsung is a punchy, vibrant watch. Contrast is a strong point, but the 46C8000 deals with movement and dishes up the details almost as impressively.

Picture noise keeps its head down in all but the most exacting circumstances and, just like its little brother, it might sound a bit ineffectual but it steers well clear of the shrillness of some competitors.

Struts its stuff with 1080p
Treated to some native 1080p content, the Samsung really struts its stuff. The colour balance ratchets down from ‘toasty' to merely ‘vibrant', insight into darker scenes becomes even more explicit and motion stability just isn't an issue.

Combined with considerable apparent depth of field and spectacular control of contrast, the UE46C8000
is never less than enjoyable.

The Samsung is by no means unique in suffering from noticeable cross-talk between left- and right-eye information when viewing 3D content, but there's no denying the pronounced depth of the 3D pictures it produces.

The ability to be able to reduce the backlighting setting (which is shoved up to maximum, along with contrast) when playing a 3D film is welcome too, as the 46C8000 doesn't become as dim as some competitors when you're wearing your Samsung specs.

When we considered the UE46C8000 for 2010's Awards, it generally cost in excess of £2000 and we
were concerned that the Sony KDL-46HX903's superiority would cause the Samsung's fifth star to slip away.

Since then, though, the 46C8000's typical price has dipped down below £1750, and at that sort of money it needs no caveats to its maximum star rating.