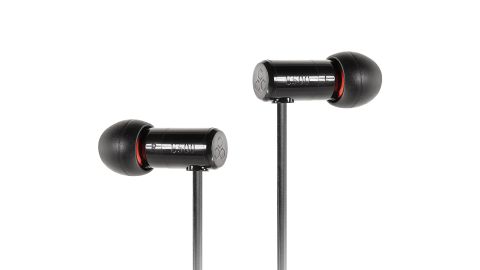 If you need to upgrade the headphones that came bundled with your phone, the Final E500s are an easy and inexpensive sonic step-up

Final (sometimes called S’NEXT Final) is a Japanese audio firm founded in 2007, noted for its wide range of headphones. The company’s website is bursting at the seams with them – we counted 48 different headphone models across 11 different series, boasting multiple drivers, customisable sound tuning, intricate 3D-printed titanium driver housings and all manner of intriguing designs.

The E500 wired in-ears cost just £20 in the UK (they're not currently available in the US or Australia) and are the cheapest pair of headphones in Final’s extensive arsenal of listening gear.

These headphones weigh just 15g in total. The 1.2m cable is a robust but basic black affair, with a small slider where the two earpiece cables join together, which can be moved closer to your chin to achieve greater comfort or to avoid one wire getting snagged on your shirt buttons.

There’s no in-line mic or volume control and the 3.5mm headphone jack means you’ll need a dongle for use with an iOS device. With analysts predicting that Apple’s iPhone 12 won’t come bundled with wired EarPods, you might be in the market for a pair sooner than you think.

The jack is mounted at a right angle to the cable, so the wire sits almost flush against your device when plugged in, which is a nice touch. It minimises cable kinks and noise if your phone is often left in a bag or pocket.

The earphones’ black thermoplastic tubular driver housings are about a finger’s-width in length, before you get to the buds. Four extra tips are supplied to make a total of five, which is impressive at this level.

The word ‘final’ is etched across the length of the unit, as is the model number, an L or R to denote left and right buds, and the firm’s triple-hexagon honeycomb logo on the circular end surface of the driver housing.

It’s a cool, professional aesthetic that seems keen not to scream its presence. The pre-fitted pair of buds fit perfectly; the E500s are light, comfortable and secure in our ears, with pleasing levels of natural noise isolation to boot.

Surprisingly, Final’s 6.4mm small aperture dynamic driver is nestled inside those housings – the same driver that’s used in all of the firm’s E-series in-ears, including the £219 E5000s. And at a tenth of that asking price, they have our full attention as we settle in to start listening.

While the cost of the Finals is relatively trivial, we soon learn that their sound is anything but. We cue up Buzzcocks’ Ever Fallen In Love and the intro’s up-tempo riffs and drums and relayed with energy and clarity. There’s plenty of electric guitar detail coming through our right ear, while Pete Shelley’s vocal is textured and central in a pleasingly broad soundstage as the Final E500s reveal a trouble-free treble that never comes off harsh.

The keys in Debussy’s Clair de Lune, streamed from Tidal, are nicely three-dimensional, with enough separation between each musical note and passage to mark a step up from the wired headphones that come bundled with many smartphones. We switch to Apple’s wired EarPods and the presentation is notably more treble-centric. Because the Finals are able to pay greater homage into the midrange frequencies, they dig up an extra ounce of spatial awareness and detail throughout the piece.

Throughout Gang of Four’s Damaged Goods, the electric bassline underneath the bitter, almost spat midrange vocals could use a tad more control though. Across the bass registers we become aware of shortfalls in weight, grip and agility.

Of course, you could argue that it’s acceptable at this price-point, but as we continue listening, despite tapping our feet and enjoying the E500’s timing chops, the shortfall in terms of influence through the low-end continues to present itself. As we listen to grimier tracks from Stormzy and funk-heavy Prince songs, the bass lacks power and authority, which is a shame.

The Final E500 in-ears are almost certainly a step up in terms of timing, spaciousness, clarity and comfort from the headphones that come bundled free with your smartphone.

If you’ve read any of our sub-£50 in-ear reviews, you’ll know that inexpensive doesn’t always mean good value. To earn those five stars, a product should not get in the way of our listening experience, however trivial the cost.

But for a budget upgrade to your smartphone freebie headphones, the Final E500s are a good buy. But they’re only a ‘good’ buy because, even at this price, the minor but noticeable lack of grip and dynamics through the bass is enough to render them a little off great.