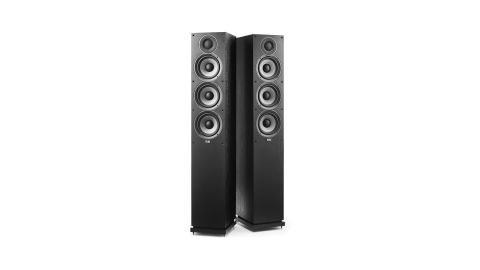 The Debut 2.0 F5.2s offer an understated alternative to the more forward-sounding speakers we could recommend at this price

Often, he who shouts loudest has least to say. That isn’t entirely the situation in which we find ourselves with sub-grand floorstanders at the moment, but while our favourites are far from shy and retiring, there is certainly room for a more reserved character to join the top table.

Step forward Elac. While others may demand attention, these Debut 2.0 F5.2s would rather earn it. They make their point clearly and concisely, delivering each anecdote with wide-eyed expression. If they were a person, they’d be easy to miss, but impossible to ignore.

For this 2.0 range, Elac has taken the bold step of redesigning much of its successful Debut speakers. That includes the main drivers – the F5.2s each house three 13cm versions in a three-way configuration – which use Aramid fibre, rather than paper or polypropylene, for its greater stiffness and damping qualities.

The F5.2s’ black vinyl wrapped MDF cabinets are larger and more robust than their predecessors, and incorporate specially designed internal bracing for improved stiffness and overall strength. There is also a trio of rear-firing bass reflex ports spaced evenly along each speaker’s spine. It’s a pretty radical overhaul for an already successful product.

For those coming to Elac’s Debut 2.0 series fresh, though, these are the larger of two pairs of floorstanding speakers in a range that also includes two pairs of standmounts, two home cinema centre channels, a pair of Atmos speakers, a space-saving surround speaker solution and active subwoofer.

Though we’re testing the F5.2s as a stereo pair, Elac has provided the means necessary for incorporating them into a well-matched home cinema surround package as well.

That versatility is present in much of what these talented floorstanders are about, starting with positioning. Though Elac says the cabinets are marginally larger than in the previous Debut series, the F5.2s’ preference of being placed close to a wall means they shouldn’t dominate a room.

Bringing the speakers further into the room and toeing in to our listening position contributes a marginally more focused stereo image, but we eventually find our ideal balance in close proximity to our test room wall, with that triumvirate of reflex ports working well to plump up the low-end.

It’s not a criticism of Elac when we say that some rivals offer a fuller presentation – in fact, some rivals can offer more in most regards. But the F5.2s aren’t about offering more; they’re about offering the music as it is fed to them, as transparently as possible.

As you’d imagine from such a speaker, detail and textural insight is a real forte. Without being overly analytical, the F5.2s display a maturity in their reading of an arrangement, taking note of an instrument’s body as much as any idiosyncrasies in the way it is played.

It is a spacious soundstage too, without losing focus. Strong organisation ties instruments together, particularly as each is given its own little space in which to dance. It’s a generally airy presentation, but nothing feels detached, as if it doesn’t belong to the whole.

Plenty of speakers can dig impressive levels of detail out of a recording, but what helps Elac stand apart here is that the F5.2s are also full of life. Snappy timing and an expressive range of dynamics helps lock in rhythms, and while these speakers don’t perhaps throw the music at the listener as much as lay it before them, it’d be wrong to say they lack punch.

Most impressive is the F5.2s’ bass response. Thanks to their multiple reflex ports and three-way driver configuration, these Elacs can go low, but there is bass clarity beyond the grasp of most floorstanders at this price. It can sound warm and full when asked, but it is those sharp jabs that are most impressive; these towers are agile enough to dip down low with little notice and still hold their head further up the register.

Some may prefer the slightly more excitable nature of Fyne Audio’s F303s, for example, which is echoed further up the chain by speakers such as B&W’s 603s.

But this is in many ways a more mature, honest presentation – neither sucking the life out of a piece, nor exaggerating it. There will be many suitors for a character such as that, but at this price, Elac seems one of the few companies that can do it with such aplomb.