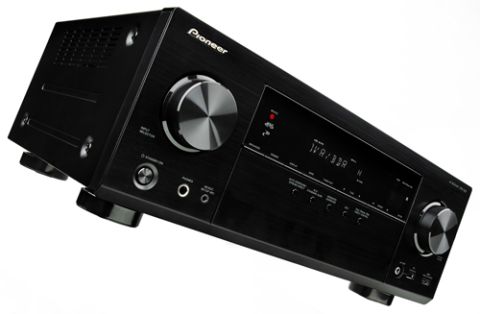 If you don’t want to choose between performance and functionality, here’s a good option.

The Pioneer VSX-528 is a 5.1-channel AV receiver that slots in just below the start of the firm’s 2013 range. It offers a good balance between sound and useful features.

After a simple set-up, we load up a Blu-ray of robots-vs-monsters-fest Pacific Rim. The Pioneer’s sound is good for the price.

During an ocean-based fight scene, the crashing waves and sounds of crunching metal sweep across the room to give a good sense of atmosphere. It’s a clean sound, and speech is clear.

The tonal balance is good, with no part of the frequency range given undue attention. Bass is prominent but not overpowering, and the top end offers crisp detail without hardening up.

It’s a neutral sound that gets the job done with minimal fuss. A good level of agility also helps.

The sense of scale is decent, but it’s not the massive, enveloping sound we get from the Yamaha RX-V375. It doesn’t punch quite as hard as we’d like either, and struggles a little with dynamic shifts. Volume isn’t an issue – it just doesn’t sound that dramatic.

Overall, it’s a capable, functional sound that needs more punch to be great.

When it comes to connections, the VSX-528 is fairly well equipped. You get six HDMI inputs, which handle HD and 3D pictures, as well as 4K pass-through.

There’s also a USB port, one each of digital optical and coaxial inputs, as well as three sets of analogue inputs.

There’s no wi-fi on board, but you do get internet access via ethernet. The Pioneer is DLNA-certified, which means you can stream music from a networked computer or storage device.

Internet radio is an option too, or you can wire up with an old-school antenna for FM radio.

Pioneer seems to have taken the stance that smartphones and tablets are integral to the AV experience. As such, mobile connectivity is here in a big way.

The HDMI input at the front of the machine offers MHL 2.0 connectivity, which lets users play high-definition content from compatible devices.

Apple support includes iPhones and iPods with the old 30-pin plug as well as the new Lightning connector. These are handled by the front USB port, which also charges the devices.

Alternatively, you can stream wirelessly via AirPlay, which uses your home network to send music from Apple devices to the Pioneer.

Don’t have an Apple device? The Pioneer also supports HTC Connect, which lets users of compatible HTC phones (including the HTC One) play music and control the volume wirelessly. Bluetooth isn’t built-in, but there is a port for an external dongle.

There’s also a free remote control app for iOS and Android. It’s not the full iControlAV2013 app we know and love, but the simpler Pioneer ControlApp, which offers basic control and content-browsing options.

We like this amp. It doesn’t offer the final word in sound or specs, but it does occupy a comfortable spot in the middle ground.

If you want good surround sound with a handful of features, this Pioneer is a very good candidate.