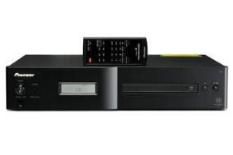 Not flawless, but it’s extraordinarily talented, too

If outright clarity and overall transparency is your thing, there is nothing in this class that does that better. The Pioneer doesn't stamp much of an imprint on the music, and that's a good thing. You'll hear more detail, and the differences between production qualities of recordings are more readily apparent.

Stereo imaging and focus are real strengths of the Pioneer, making even the best of its rivals sound a touch vague when it comes to the placement of instruments in a soundstage.

Sounds like the PD-D6-J is a real contender? It would be if it weren't for a couple of mild shortcomings that leave the door open for the cheaper, but superbly rounded rivals to walk through.

First off, and probably the most significant drawback is a rolling-off of dynamic punch. This makes the machine sound polite, and renders the likes of the Red Hot Chili Peppers too polished for our tastes.

Remote hits a bum note
Also, as with most Pioneer gear we test, the top end is rather prominent. This can be tempered by careful system-matching, so shouldn't be much of a problem.

Last, we hate the thin, cheapo remote handset: it's fiddly and nasty to use – especially at £350.

Often, a product that exhibits such weaknesses would lose a star, but so capable is the Pioneer in its areas of strength that it demands a serious audition before you buy anything else. Hear it yourself.