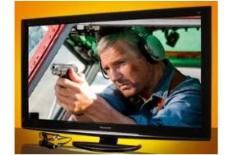 An excellent TV: the only thing to count against it is the presence of Sony’s new, and even better, rival

Few televisions have have been more eagerly anticipated on whathifi.com than Panasonic's TX-P50VT20B.

In theory, the VT20B's plasma technology should give it superior 3D performance, with none of the detail-smothering ‘crosstalk', where elements of picture information intended for your left eye are relayed to your right eye, and vice versa, creating a halo effect around objects.

This can sometimes blight 3D on LCD and LED-backlit LCD TVs. That's because plasma has no issue with panel response time, unlike its flatscreen rivals: how ironic that a TV technology some (not us) dismissed as outdated is now being heralded as the saviour of 3D.

We'd watch the Freesat tuner given the choice: it's crisper, edges are more precisely described, and digital noise kept more firmly in check. In this case, you don't get Dolby Digital 5.1 from Freeview HD either: see our News story for more.

You'll find extensive connectivity, including four HDMI 1.4 sockets. A Media Player feature handles MP3, AAC, AVCHD and DiVx files from SD card or via USB, while online access is via either ethernet or an optional wi-fi dongle.

This supports Panasonic's Viera Cast online streaming service (recently bolstered with Acetrax online movie streaming) plus DLNA-compatible components on your network. Finally, you can use the 'VT20B as a simple PVR, by connecting an external USB hard-drive.

So what about performance? Out of the box, the picture appears muted: in fact, in comparison to the bright presentation of modern LED-backlit LCD TVs, the TX-P50VT20 appears a little, well, dull. But that's a false first impression: give it a thorough tweaking, and things rapidly change for the better.

Performance is outstanding
Your first task is deciding which of the many preset picture modes to opt for (there are eight). Most offer you a full range of adjustments, with two, the Professional modes, allowing for calibration by an Imaging Science Foundation (ISF) engineer.

However, even inexperienced users can enjoy great results by selecting the Panasonic's THX mode, which works well for DVD and Blu-ray watching, although initially there's a yellow-ish hue to skin textures.

Once that's dialled out, the Panasonic renders solid blacks and natural colours: it copes with rapid movement well too, although we'd disengage the TV's Intelligent Frame Creation (IFC) mode with DVDs: use it, and movement seems less filmic.

Direct comparisons with our reference Pioneer PDP-LX5090 Kuro plasma proved enlightening, because the Pioneer still has the edge for black levels. True, the Panasonic handles motion more smoothly and is arguably more detailed, but it's also more susceptible to banding (visible bands of colour in solid expanses of image).

Deeply satisfying 3D
Of course, you can't buy the Pioneer any more, and the Kuro won't handle 3D either, unlike the VT20. And there's no disputing the Panasonic's 3D ability. Fed with Cloudy With A Chance Of Meatballs, the Panasonic's picture is as stable and sharply defined as any we've yet seen, and seems free from crosstalk.

It's a deeply satisfying experience all round, with the proviso that you'll need still more tweaking to deliver optimum performance in 3D.

We're impressed, and given the acclaim given this set since its launch, that's no surprise. Just about the only area where the Panasonic is less than wonderful is its sound, which is no more than OK.

So why ‘only' four stars? Simply that, as we were working on our review, the Sony KDL-46HX903 arrived and in a head-to-head comparison between the two sets, this remarkable TV bests even the brilliant Panasonic.

Which, given the sky-high standards set here, is some achievement.