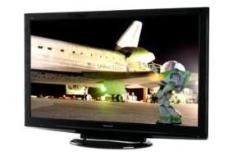 For off-air and video viewing, the ‘S20 remains good value for the money

All the latest bells and whistles aren't for everyone. If you prefer to keep it simple when it comes to what you do with your TV, the Panasonic TX-P50S20 could be for you.

Missing the boat with some of the latest technologies, the S Series instead combines a newly trimmed price tag and an aim to major on value.

This set retails at about £400 cheaper than its sibling, opposite, so you'll have to make do with just the Freeview HD tuner; there's no Freesat offering.

Some specification shortfalls
While we tend to favour Freesat's HD picture over Freeview's, it's more pertinent that you won't get 5.1 digital audio from this set's Freeview HD tuner until Panasonic delivers a firmware update to rectify a compatibility issue (no sign at the time of writing).

The other main spec gap comes in terms of internet-enabled functionality. You'll find no Vieracast – Panasonic's Internet TV application – or any ability to stream content from other devices on your home network.

Elsewhere, this set has the previous generation of Vreal Pro, Panasonic's TV processing engine, a stereo set of speakers as opposed to the ‘2.1' system housed within the V Series and three rather than four HDMI inputs.

Unbox this set and you'll notice the different finish, too, the ‘S20 offering a black chassis and matching remote as opposed to the silver finish of the more expensive model.

The on-screen menus won't have you calling your pals round to gasp in awe but the Panasonic's workmanlike interface is at least a doddle to navigate.

First impressions of the Freeview HD tuner are good. BBC News, with its news ticker, is a classic choice for testing familiar colours and scrolling motion, and the 'S20 holds up well.

Edges are drawn fairly sharply, it's relatively free of noise and, for such a big-screen, even lower quality Freeview channels stand firm.

Kick-back in front of the Blu-ray disc of Training Day and while black levels show reasonable solidity and insight, there's not quite the depth to blocks of colour as found on the bigger brother.

Flick to a daylight scene and while the film's colour palette and general details are delivered competently, a layer of subtlety is missing meaning you get slightly cruder colours and a less intricate image.

Just slightly inferior to its sibling
The comparison continues with DVD playback and even the sound performance, with the stereo speakers lacking body compared with the V20 – already an average sonic performer.

Still, it is a hefty chunk cheaper than the best available, and it's the price tag that saves this set. We liked it at a higher price: at £1000 this set is a decent consideration if you're after a bargain