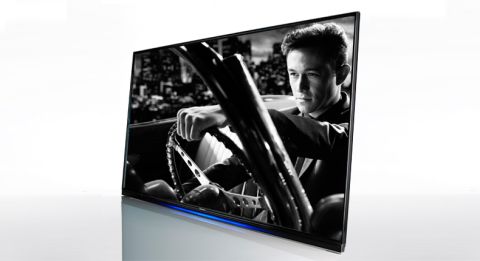 A gorgeous screen with stunning colours and punchy detail, but at a high price

Panasonic has had a rocky start to the 4K Ultra HD scene. Its first 4K TV we tested - the TX-58AX802B - wasn’t capable of streaming Netflix 4K at the time, which we felt was a glaring omission for a 4K set.

That issue has now been fixed, with Netflix 4K in full working order. And the TX-65AX902B shows just what a flagship Panasonic screen can do.

This 65in screen looks gorgeous. What impresses us most is how beautifully judged the colour is, striking just the right balance between punch and finesse. The picture (in 4K or Full HD) is one of subtle shading imbued with rich, warm tones.

The Guardians Of The Galaxy Blu-ray has aliens and planets of every hue, and the Panasonic screen revels in delivering each one of them. There’s warmth and vibrancy to the red leather jackets and bright yellow prison jumpsuits, which contrast nicely against the grungy steampunk tones of the space prison.

Brightly lit scenes show off the Panasonic at its best, with punchy, bright highlights and solid blacks that remind us fondly of plasma screens. In a dark scene, those blacks aren’t quite so solid and dark. The slightly patchy backlighting in the corners of our set’s screen doesn’t help, either.

Switch to a more realistic palette such as that of Captain America: The Winter Soldier and the 65AX902B takes a confident approach with the steely greys and natural landscapes. Skin-tones are displayed with realism – not too pale, not too ruddy – and there’s a three-dimensional quality to the characters that’s lovely to see.

Detail definition, in 4K and Full HD, is excellent. There’s depth and subtlety to Breaking Bad episodes on Netflix 4K, while stock clips in 4K show how stunning native content can be. Blu-ray films are upscaled with skill, with no discernible noise or pixellation.

It’s a clean picture, though we wish it were a touch crisper. We like the smooth, natural quality of the Panasonic but the rival Sony KD-65S9005B is more definite in the way it displays edges. This is a passive 3D set, and it’s a comfortable experience. It’s not tiring on the eye, but the 3D effect isn’t quite as dramatic or as smooth as we’d like.

We would stick to HD as much as possible, as the quality of standard-def programmes doesn’t do justice to the 65AX902B’s talents – the rival Sony screen offers a slightly cleaner, crisper picture with upscaled content.

Panasonic’s speakers are comfortable to listen to. There’s weight and detail to the sound, and voices are loud and clear. If you want the full cinematic experience, though, we’d certainly invest in a 5.1 speaker package to match the performance of the 4K screen.

The TX-65AX902B might just be one of the heaviest TVs we’ve handled in recent years. The screen itself is two-person lift – and so is the hefty stand. Roughly the size of a large encyclopaedia, it offers stable support to the screen, which is slightly tilted back.

This tilted design means that you may need a lower-than-average stand to view it straight on. On our racks, the screen is a little too high and leans away from us – which isn’t entirely immersive.

One of the standout features for Panasonic TVs this year is the addition of Freetime, a free TV guide service that lets you catch up with the past seven days of telly. On the 65AX902B it is restricted to channels that have an on-demand app.

So any BBC shows are up for grabs through BBC iPlayer, while Freetime does this as well as open up access to 4oD, ITV Player and Demand 5. Freetime also replaces Panasonic’s programme guide interface, giving the TV a breath of fresh air. Gone are the flat greys. Freetime is colourful, sleek and modern. It’s faster to use, too, and makes channel-browsing a more appealing experience.

We particularly like the ‘Showcase’ section in Freetime, which highlights TV shows that are currently available to watch on demand. It’s a good way to discover new shows, while ‘My Stream has further recommendations for you based on your online and broadcast preferences.

Another neat feature is ‘TV Anywhere’. It allows you stream live and USB-recorded content on your smartphone or tablet when you’re on the move. Just make sure your location has a good broadband connection.

Using the 65AX902B is swift and intuitive, especially with the standard remote control. It’s a nicely made, satisfyingly hefty unit, and it makes quick work of navigating the various ‘My Home Screen panels and shortcuts, and of more mundane matters such as changing the volume.

There’s a smaller smart remote too, but we prefer the standard unit. While it fits nicely in hand, using the touchpad isn’t quite as intuitive or comfortable to use on a daily basis. Those wanting to use their smartphone or tablet can download the free ‘TV Remote 2’ app. It responds well, is neatly laid out, and you can transfer media files from your smartphone to TV with just a single swipe.

The 65AX902B has a decent spread of connections, with four HDMI 2.0 and three USB inputs. The HDMI inputs support 4K passthrough and upscaling, 3D content and ARC. You can play photos, music and video files – including 4K – stored on a flash drive or hard drive, while an SD card slot gives you another way to access media files on your camera.

There are both Freeview HD and Freesat tuners built in. Wi-fi is built in, although we prefer using the wired ethernet socket for a more stable connection when streaming Netflix 4K – essential to reduce buffering issues.

We’re impressed with the Panasonic TX-65AX902B. That gorgeous colour balance is hard to achieve at any price, and the 65in screen’s insightful, punchy performance is hugely commendable. The sleek new Freetime TV guide adds a splash of style to the user experience, too.

The biggest issue here is price. The Panasonic TV costs a staggering £5000. That’s a grand and a bit more than its five-star Samsung and Sony rivals. The Panasonic needs to achieve excellence to justify that premium price tag and best its rivals – but it’s not quite there.