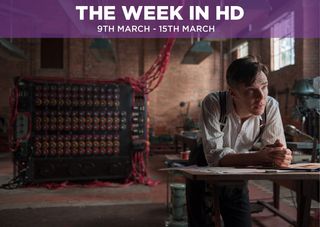 Benedict Cumberbatch plays Alan Turing, the man who solved the Enigma code and was instrumental in winning the Second World War, in this brilliantly-acted and brilliantly-written biopic. With Charles Dance, Mark Strong, Matthew Goode and Keira Knightley putting in strong performances, it's Cumberbatch who shines as the genius and war hero who was later persecuted for his homosexuality.

A superb film that deftly handles the balance between being clever, funny and emotional.

Buy The Imitation Game on Blu-ray at Amazon

A tie everyone – well, apart from the teams still in it – would have loved to have been the final is in fact the quarter-final.

Arsenal’s recent record against Manchester United has been poor, but they go into this match in a better mood than United, who look more like a collection of individuals than a team at the moment.

Fallout. Last week's nuclear blast may have separated the dual entities of Firestorm, but General Eiling wants them re-joined to create super soldiers.

The One That Got Away. The nail-biting conclusion to Kitty's two-parter story arc is thrilling and emotional in equal parts. Kitty wants an end to her tormentor, but will it be at the cost of her innocence?

There are moments in tonight's episode that will have long-term Elementary fans jumping with joy, along with a flashback that finally reveals exactly how Sherlock and Kitty came to work together and trust each other.

Buy Elementary on DVD on Amazon

Rejoice, food-lovers, for MasterChef is back! John Torode and Gregg Wallace present the 11th series of the competition for amateur chefs, with five contestants hoping to impress with their signature dishes.

Next, there's a twist on the invention test - a 'reinvention' test, where they must design a new dish using the main ingredient from their signature one.

Which chefs will get through to the next week?

The return leg sees this match poised at 1-1. Chelsea have the advantage with the away goal, but PSG were impressive in the first leg and will go into this match with a good chance of upsetting Jose Mourinho.

And who wouldn’t want to see that?

Ahead of this weekend's inaugural F1 race of the 2015 season, pundits David Coulthard, Eddie Jordan and Suzi Perry take a look back at the 2014 season and the sizzling rivalry within the Mercedes team.

Lewis Hamilton and Nico Rosberg were locked in a title battle that had viewers on the edge of their seats, while the rest of the grid had their ups (Williams) and downs (Red Bull and Sebastian Vettel).

More delicious cookery on screen, as the first round contestants attempt to serve up tasty and pretty plates of food.

If you can make it through this show without your stomach grumbling, we salute you.

The Return. Are flashback episodes indulgent fun or are they lazy? Sometimes they prove useful in unearthing new knowledge of all characters (Lost), while other times it's just an excuse to show characters with really bad hair (Friends).

Starling City's masked vigilantes and their enemies take a trip down memory lane, while Deathstroke makes an appearance.

After beating Juventus a week earlier, Fiorentina will hope to continue their recent good form against Roma.

Montella’s men beat Spurs convincingly to get through this round, but even though Roma’s form has stuttered of late, this won’t be an easy match for La Viola.

England did not turn up at this year’s World Cup, and like the England football team last year they're out of the tournament.

Can England save some pride with a decent performance against Afghanistan?

It's a night of comedy and charity, as the 2015 Comic Relief kicks off live from the London Palladium.

There's a plethora of actors, comedians, musicians and presenters involved in tonight's festivities, from endurance activities to raise to money to the brilliant sketches and special episodes made just for tonight.

The one's we're looking forward to are a brand new Mr Bean sketch from Rowan Atkinson; a special episode of The Vicar of Dibley where Geraldine (Dawn French) is in the running to be the next female bishop, facing stiff competition from famous faces along the way; and Catherine Tate making a special appearance in a Stephen Hawking-inspired Little Britain sketch.

England and Scotland meet in the penultimate weekend of the Six Nations Rugby tournament. England has not lost to the Scots at home since 1983, and to keep that up they'll need a better performance than the one against Ireland to get past them.

England dominated last time out, leaving the Scots without a single point. Expect Scotland to come at England like a scene out of Braveheart.

If The Imitation Game has left you wanting more World War Two-related codebreaking films, then this Tom Stoppard-written film may whet your appetite.

A codebreaker at Bletchley Circle (Dougray Scott) attempts to solve the Enigma Code while also wondering what happened to the girl he loves (Saffron Burrows), who mysteriously disappeared.

Disappointingly, there's no mention of Alan Turing, but there is a stellar cast consisting Kate Winslet, Jeremy Northam, Nikolaj Coster-Waldau, and Tom Hollander.

Fun fact: the Enigma machine used in the film belongs to The Rolling Stones' Mick Jagger, who is also listed as a co-producer.

In tonight's episode, our intrepid presenters try to figure out what's all the fuss about classic cars.

They buy a Fiat 124 Spider, an MGB GT, and a Peugeot 304 Cabriolet, and go about owning them, tinkering with them, driving to the countryside and then taking them for a track-day spin. Will they be enchanted, disillusioned or plain annoyed by them?

Gary Lineker also drops by and attempts to set a decent lap time on the track.

Update: BBC has declared that the last two episodes of Top Gear series 22 will not be shown, which includes tonight's episode. Sigh.

The Australian Grand Prix. Formula 1 is back, and there are plenty of changes to look forward to this year.

The biggest news is that four-time world champion Sebastian Vettel has left Red Bull Racing to join Kimi Raikkonen at Ferrari. That's quite a formidable team. McLaren, however, have the most experienced team on the grid, with Fernando Alonso and Jenson Button racking up 500 races between them. Alonso, sadly, will miss out this first race as he recovers from a crash during testing.

At the other end of the grid, Max Verstappen becomes the youngest ever F1 driver at just 17 years of age. We'll see what he's made of this weekend at Melbourne's street circuit - an excellent, if stupidly-early, start to the 2015 race season.