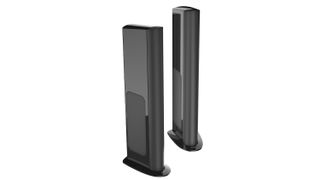 At CES 2019, GoldenEar Technology has introduced its latest pair of passive speakers. The Triton One.Rs have been designed as more compact, less expensive versions of the brand’s flagship Triton Reference ($8000+).

The Triton One.R’s distinct visual design is the result of carefully considered sonic engineering. A cabinet constructed of multi-density medite has been chosen for its non-resonant qualities.

The baffle’s distinct narrowness is said to minimise diffraction, while the sides of the speaker (as well as the separate internal enclosure housing the upper-bass/midrange drivers) are purposely unparallel in order to minimise internal reflections.

The Triton One.Rs have integrated 1600-watt powered subwoofers, with 56-bit digital signal processing that GoldenEar Technology claims it can use to flatten and extend the bass response further than is possible from a passive bass section.

Three 5in x 9in long-throw subwoofers are coupled with four 7in x 10in quadratic planar infrasonic radiators are balanced (two on each side) in order to reduce cabinet movement.

GoldenEar Technology has similarly balanced the crossover, with components (again, some of which feature in the Triton Reference) placed on both sides of the drivers for an allegedly improved sound.

Two new 5.25in upper bass/midrange drivers utilise the magnet structure developed for the Triton Reference, and the flagship’s High Velocity Folded Ribbon tweeter is present in the new model, too.

The Triton One.Rs, priced $2999, are finished in hand-rubbed piano black lacquer and are shipping now.