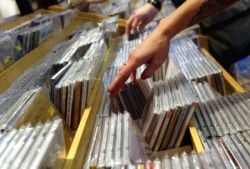 Just over 86m albums were sold on CD in 2011, according to figures compiled by The Official Charts Company, representing 76% of the market.

This figure represents a growth of 10% on last year, and is more than double the 86.6m sold back in 2007, showing the resurgence in singles.

It's worth pointing out that sales of singles include individual tracks bought from albums as well as single releases in the more traditional sense. This naturally helps boost sales figures for "digital singles".

Adele, Maroon 5 and LMFAO had the three best-selling singles in 2011, while Adele's 21 album took the top album sales spot, selling 3.8m copies - more in a year than any other album in British chart history.

Michael Buble's Christmas album made it to number 2 in the album sales chart, which showed the importance of the Christmas period for sales.

In fact, the last week of 2011 was the best-selling week of the year for digital album and singles, with 1m albums and 5.7m singles sold, no doubt bouyed by people with gift vouchers or new toys to fill with music.

Geoff Taylor, BPI chief executive, said: "The most encouraging news of the year is the strong backing consumers are giving to the digital album format. British music fans understand that the album remains the richest way to connect with an artist's work."

"Digital developments grab the headlines, but the CD remains hugely popular with consumers, accounting for three-quarters of album sales. Physical ownership is important to many fans and the CD will be a key element of the market for years to come."