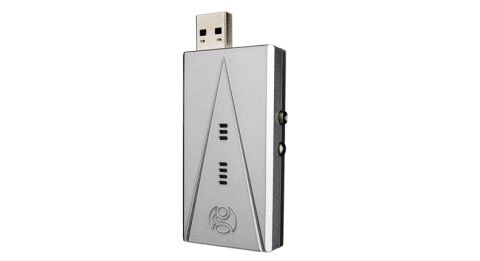 A good ad for crowd-funded hi-fi; solid but not quite as talented as some rivals

Crowd-funding for hi-fi kit is becoming a bit of a trend. When Light Harmonic started a Kickstarter campaign for the Geek Out, the initial target was set at $28,000.

The final amount raised was more than a staggering $300,000. Time, then, to see if this portable DAC was worth the wait and the investment…

Thinner and not much bigger than a box of matches, the Geek Out comes in four different colours: white, silver, red and black.

Here, then, we are reviewing the silver, 450mW version. The design is functional rather then flamboyant, but there’s only so much you can do with a device so small.

It feels solid in hand, although we’re a little concerned that the USB connector doesn’t have a cap for protection (at least a carry pouch is included in the box).

To prevent you placing too much strain on the connector, LH Labs provides a six-inch USB extension cable. Concave and convex buttons on the DAC’s edge shift volume up and down, but the Geek Out doesn’t respond very promptly to a press.

It’s easier and quicker to change volume on your computer. The buttons on our review sample also rattle a bit, which cheapens our impression of the device.

The row of indicators running along the middle of the unit shows sample rates being played. A sticker on the back of the unit tells you what the various combination of lights mean, but having to flip your whole laptop over to check isn’t ideal.

This set-up is over-complicated and counter-intuitive. The Geek Out DAC can handle a multitude of sample rates natively, including 24-bit/192kHz and even DSD files should you own any.

You’ll need to download dedicated drivers if you’re a Windows user, but for Mac and Linux operators the Geek Out is compatible out of the box.

Twin headphone outputs are an unusual feature on any DAC, but the Geek Out comes equipped with them. One is for use with home hi-fi headphones, the other more suited to portable in- and on-ear designs.

The former delivers greater refinement and finesse; the latter sacrifices some of this and just seems to increase the volume a bit.

Play a CD-quality rip of Daft Punk’s Get Lucky and the Geek Out paints an insightful picture. The bass-line sounds particularly purposeful and poised, and there’s also a general feeling of solidity and drive to the track.

There’s plenty of detail and texture to be had in the hand claps and sparkly highs. Pharrell’s vocal sounds rich, natural and realistic.

Pressing the two volume buttons simultaneously engages the DAC’s 3D “spacialisation” mode which, LH Labs claims, will move the sound from between your ears to outside your head.

To be fair, we feel you get a greater sense of spaciousness and height, but the trade- off is a slight loss of cohesion and solidity.

As ever with such tweakery, it pays to experiment… The DAC isn’t quite as convincing when it comes to communicating the track’s funky rhythms – we’d like a greater sense of drive and rhythmic precision.

Play a DSD file of Marvin Gaye’s What’s Going On? and, although it sounds rich, warm and packed with resolution, the Geek Out doesn’t quite have the feel and soulful flow of the track nailed down.

The Geek Out is undoubtedly a clever little device with an interesting background story.

It’s also a very competent sounding device even if it doesn’t quite display class-leading credentials.