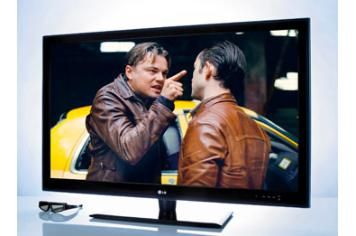 It’s not without merit, but the 47LX6900 is compromised by its reluctance to control motion satisfactorily

You can generally rely on LG to deliver a TV with the looks, finish and specification to make the price look a bit of a bargain.

The 47LX6900 is a glossily good-looking, slim set, filled with cutting-edge tech and offering no hint of having been built down to a price. Where showroom appeal is concerned, the LG could cost half as much again and its impact wouldn't be lessened.

Even at this kind of price, though, there are elements that most customers have come to demand as their right – and the LG doesn't scrimp.

Add a clear remote control and big, logical menus and the LG seems grand. Some of this assurance is rocked by its TV reception, though.

There's no denying the LG's splendidly neutral and natural colour balance, nor its impressive black levels, but it's vexed by patterns and is prone to shimmering around what ought to be straight, stable edges. Motion is a little disappointing too, with sports broadcasts in particular susceptible to smearing.

All these traits are carried over when the LG upscales DVD content. There's a softness and lack of detail to skin, while motion provokes noise and edginess to an unacceptable degree.

The expertly judged colour balance is, again, the best thing about the 47LX6900's pictures, while sound is surprisingly spacious and well defined – especially considering the screen's deliciously slim 3cm depth.

As you'd expect, a switch to Blu-ray helps matters no end. The depth of and detail within black tones is good, and the LG sorts its act out where skin-textures are concerned.

inability to deal with motion
It's really the 'LX6900's inability to deal convincingly with motion (irrespective of how you might finesse the set-up menus) that really holds it back: the leading and trailing edges of moving objects are noisier and less coherent than with any other set here.

Only a class-leading showing with 3D will be enough to save the LG's bacon but, while it's far from disastrous, it's not quite good enough.

Monsters versus Aliens enjoys tremendous apparent depth, and while the effects of cross-talk are evident, they're certainly no more pronounced than those of most rivals.

The colour palette remains tremendously balanced and believable, and 3D effects are generally stable. Unless they're moving, when the 6900 again has a metaphorical panic attack.

To a lesser or greater extent, then, the 47LX6900 snatches defeat from the jaws of, if not an outright victory, than at least a creditable score-draw.

In some respects it's as talented as its best competitors regardless of price, but it's undermined by its inability to deal decisively with motion. As a consequence it can't be called better than average.