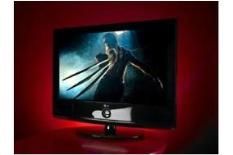 LG has steadily been making waves in the TV market thanks to a series of solid-performing TVs coupled with some versatile HDD-equipped sets that proved equally adept.

This model sticks to the business of watching TV and video but once more shows much promise.

Certainly in terms of build and styling LG has managed to set its TVs apart. The company's trademark (and slightly curious) clear circle power button is back, as is the smart finish in 'high gloss black with red accents'.

Striking looks, technically adept
The LG stands tall and proud on its swivel stand, making for a rather imposing but good-looking unit compared to other sets in its class.

Sonically we have high hopes, LG making much of its new Clear Voice II mode for the invisible speakers, and sure enough the LG churns out full-bodied sound and authoritative speech.

Thankfully, the performance of the TV does its best to make a similarly forceful impression. A strong Freeview tuner gets us off to a good start, delivering a crisp, noise-free picture that offers nicely balanced colours and good attention to detail.

Switch to video and it's more of the same. We return to old favourite Training Day and the taxing test of low-lit scenes is handled confidently with black tones remaining largely solid and accurate.

Fast motion is dealt with competently and there's a good level of insight, too.

Vivid colours and sharp edges
Watch something more colourful and there's still plenty to enjoy, with the Blu-ray of Australia delivering the necessary jump in quality and showing that the LG's capable of vivid, accurate colours, sharp edges and good insight.

Black tones aren't quite as accurate as the very best sets, but in isolation they're solid enough and with decent levels of insight.

While we wouldn't say that five-star LG televisions are yet a regular occurrence, the company's sets have certainly been getting better and better of late, and the performance of this set is a good indicator of this – it's an excellent all-rounder.

The LG will go head-to-head against rivals from JVC, Sony, Sharp, Samsung, Toshiba and Panasonic in our June issue Supertest, on sale from May 6th.