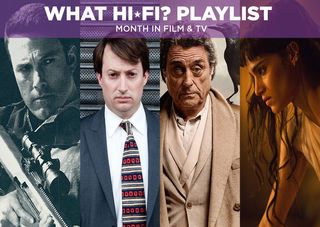 At What Hi-Fi? we watch plenty of films when testing the latest in home cinema, but we're always keen to find new films or use old favourites that we know inside-out.

MORE: The What Hi-Fi? month in film and TV – April

Thank goodness for late-night telly. Just when you need something to fill that nether hour between arriving home and raiding the fridge, and deciding it really is time to go to bed.

A whole generation of tired and emotional people owe a debt of gratitude to channels such as Gold, Dave and London Live. With their constant diet of classic British comedy show repeats, they allow inebriated sofa-dwellers the chance to rediscover the likes of Peep Show.

Since Peep Show was first broadcast in 2003, right up until the final series in 2015, it has entertained, enthralled and disgusted in equal measure. Following the lives of two flatmates, the show’s innovative first-person camera angles and internal monologues means we have become closer to Mark and Jeremy than we’d ever care to admit.

Of course, hearing their deepest inner thoughts only shows what appalling human beings both are. The vindictive, uptight Mark comes off no better than the workshy, fickle Jeremy, as their interactions with each other and characters such as Super Hans, Jeff and Dobby reveal their true characters, free from the constraints of social niceties, or indeed common decency.

It’s not so much about rediscovering Peep Show, it feels like it’s never really gone away, but each new viewing brings surprises. Each revisited episode turns up new lines, forgotten put-downs and other watch-from-behind-the-sofa moments of social awkwardness.

Series 9 ended with the realisation that the two were mutally bound together in their festering resentment, but also left the door slightly ajar for one final El Dude Brothers reunion.

As much as Peep Show is watchable post-pub telly, it also serves as a reminder that no matter what dark thoughts or petty revenge fantasies you have, there are always two people worse than you.

And that in itself is a pretty sobering thought.

Old versus new; right versus wrong; life vs death; gods vs men (and other gods).

No, this isn’t a tagline for the upcoming General Election. They’re the main reason I’m enamoured with the Starz/Amazon Video’s adaption of Neil Gaiman’s novel American Gods.

Shadow Moon (Ricky Whittle), a generally unlucky fellow, is released from prison five days early. That’s the good news. The bad news is because it’s due to the death of his wife Laura (Emily Browning) who died in a car crash.

Although in this show, death is a relative term. Shortly after becoming a free man, Shadow is employed by the mysterious Mr Wednesday (Ian McShane) as his bodyguard, protecting him as he travels across the USA gathering an army in preparation of a huge conflict that could change the American landscape.

It’s graphic, gripping and filled with great special effects. From a morphing Man in Black, to a group of Daft Punk lookalikes having their heads exploded after being kicked in a sensitive area, to a woman that absorbs men and woman while having sex with them, there’s something for everyone – provided you’re over 18.

Five episodes are available on Amazon Prime so far, with three more of the first series to come. If you’re looking for something new to devote your time to, this is it.

Happy Valley seemed to come and go in 2014 with less fanfare than the launch of the new UKIP manifesto. Even when a murmur of post-transmission buzz developed, I found myself unenthused.

“Isn’t that one of the actresses from Corrie?”, I asked no one in particular. “Playing a police officer in the sleepy Yorkshire countryside? That sounds twee."

But twee this show most certainly isn’t, although that’s not made clear during the first two episodes, in which a rather improbable kidnap plan is hatched and characters and relationships are slightly clumsily introduced.

Then, in episode 3, all hell breaks loose, and the sleepy scene-setting gives way to intense, grim and sinister events as the kidnap gets out of hand and the investigation becomes extremely personal for Sergeant Catherine Cawood.

Sally Wainwright’s writing and direction intentionally toys with your expectations and genre conventions, but Sarah Lancashire is the real revelation, delivering a stunning, emotionally raw but never overwrought performance as the tough lead character with a fragile core. Never again shall I make presumptions about a soap star’s acting talent.

You can currently watch series 1 of Happy Valley on Netflix and I thoroughly recommend you put your preconceptions to one side and give this gripping, unflinching British thriller a go.

With a 52 per cent rating on Rotten Tomatoes and a 51 rating on Metacritic, it's clear that critics found 2016's The Accountant a mixed experience.

Directed by Gavin O Connor (Warrior) and starring Ben Affleck as Christian Wolff, the accountant of the title, he is both autistic and an assassin for hire. That undoubtedly will make some cringe, especially in light of Hollywood's depiction of disabilities, but this film deserves a watch on account of how utterly mad it is.

Affleck's Wolff is a cross between Jason Bourne and a maths savant, practising accounting under the cover of a small-town CPA, while working for some of the world’s most dangerous criminal organisations.

He takes a job auditing the books of a robotics firm where clerk Dana Cummings (Anna Kendrick) has discovered signs of embezzlement. This discovery leaves them pursued by a number of hitmen.

Revealing more would ruin the fun of discovering and piecing together the narrative yourself, but the action is solid and the story – despite its inherent silliness – engages, throwing ever more absurd ideas with a straight face.

It's fairly implausible and has plenty of cliches, but what kept me invested is the film's unabashed committment to its premise. It’s hard not have to smile when there's a home security system that comes with its own Gatling gun.

View The Accountant on 4K Blu-ray at HMV

We all tell fibs, don’t we? Let me set the scene… you’re at a swanky dinner party, the last of the wine has been drunk and the conversation is starting to run dry.

It’s usually around this point that someone asks the question “What’s your favourite film?”. One by one, the guests reveal their choices: “Delicatessen”, “Anything with Channing Tatum”, “Finding Nemo, the kids love it”. Now it’s my turn, “Dangerous Liaisons” I say, and around the table, the other guests murmur in agreement.

But it’s a fib. It isn't my favourite film at all, it’s just that revealing the truth would give away my guilty secret. In fact, nothing comes close to The Mummy (1999), not even the brilliant Aliens (1986). It simply covers all the bases for a Hollywood blockbuster.

So you can imagine my excitement at the latest instalment of the franchise, starring Tom Cruise as Nick Morton, an archaeologist who awakens the ultimate evil that is Ahmanet (Sofia Boutella).

Ahmanet’s biblical powers, which have been shackled in her tomb for thousands of years, are unleashed on the world as she conjures up a whole host of monsters and demons to help her reclaim the throne.

Expect few surprises in terms of plot, but the film does pit two A-list actors together in Cruise and Russell Crowe’s Dr Henry Jekyll, who appears to have an understanding of Ahmanet. There’s also a stunning sidekick for Cruise in the form of Annabelle Wallis (of Peaky Blinders fame), some great-looking CGI and (hopefully) a soundtrack to match.

Find a cinema showing this and you’re all set for a stellar night – one that you will (probably) want to tell all your friends about.