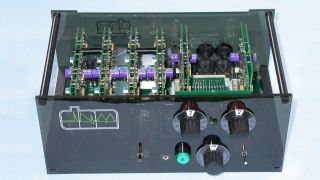 The technology used in most hi-fi is pretty mature. After decades of development, most of the industry has settled into a tight template when it comes to design. And there isn't really an issue in that, because the circuits and engineering ideas that have become convention are proven and work well.

But if a company steps out of this comfort zone, it can accomplish something special. Below are seven spectacular products that do just that.

B&W’s Nautilus is now considered something of a design icon. It has won numerous Awards for the way it looks, but that distinctive appearance isn’t just down to the whim of an artistic designer. It’s the result of the company trying to find a way to reduce the sonic contribution of a speaker cabinet.

Ideally, only the drive units should make sound in a speaker, but that’s never the case. No matter how well made, heavy or damped a cabinet, internal resonances always add sound.

The company’s engineers first experimented with open-backed baffles, which release any rear-firing sound from the drive unit into the room. This lets the bulk of that unwanted energy escape, rather than feeding into the enclosure or reflecting back through the speaker diaphragm.

However, B&W couldn’t achieve the sonic results it wanted and the idea was abandoned. But it led to the idea of a reverse-horn shape for the enclosure, which starts large at the driver end and then decreases.

You’ll still need to get the calculations right for the tapered shape, use the appropriate damping material and leave the far end open for a small amount of the energy to escape. But it has many of the advantages of an open cabinet, without the drawbacks. That’s essentially the basis of the Nautilus’s design.

The four aluminium drive units are mounted at the front of their own tapered tubes, and the length of the tube is down to the amount of energy it has to absorb. The one for the bass driver approaches 4m long – hardly a practical depth for a domestic speaker – so the engineers rolled it up. The result is one of the most distinctive and stunning-looking speakers we’ve ever seen.

The majority of hi-fi manufacturers do not make their own digital-to-analogue converters – almost every company buys off-the-shelf solutions from OEM suppliers such as ESS Technology, Burr Brown or AKM. These chip manufacturers not only supply the silicon but also give implementation instructions on how to get their ICs operational, right down to recommending circuits to make it work well.

While some hi-fi manufacturers simply implement those instructions, most of the serious ones will add a twist or two to get the optimum performance. The best do a brilliant job, getting results far in advance of others, even with the same DAC chip.

The company then loads on proprietary software that covers every aspect of digital-to-analogue conversion and filtering. By doing things in a bespoke way, the company can do the processing exactly the way it wants to, prioritising hi-fi performance above all else. The range-topping Chord DAVE takes this to an extreme.

In theory, this gives it a massive advantage over more general-purpose, off-the-shelf solutions that are designed to be used in everything from battery operated portables (where low power consumption is vital) to Blu-ray players and home cinema amps.

The advantages of Chord’s approach translate well into practice, as the company has dominated the premium DAC category (and our Awards) for much of the last decade.

3. DNM 3D preamp – Getting a handle on magnetic fields

Every piece of wire that carries an electrical current generates a magnetic field. When that conductor is close to another piece of metal, that field also generates currents in that metal. The currents in that metal cause yet another magnetic field, which interferes with the original one, slightly disrupting the current flow in that original conductor in the process.

Think of how many wires and conducting components there are in a typical piece of hi-fi electronics, and consider that it’s all usually wrapped in metal casework. Given the multitude of unwanted magnetic fields and currents generated, it’s a surprise that hi-fi sounds as good as it does.

DNM is one of the few brands that has tried to get a handle on these effects, and its products aren’t like anything else we’ve seen. The company uses acrylic cases, and metal is removed from every part of the product, right down to using plastic screws. The current preamp, the 3D, even uses multiple circuit boards that are spaced in a precise way to control any magnetic field interactions.

The result is one of the clearest, most agile revealing preamps we’ve heard. It’s hard to come to any other conclusion than that DNM is on to something, but needless to say, the company’s products aren’t cheap. The entry-level 3D preamp, the Twin, costs £7800.

Eclipse’s range of speakers is one of the most distinctive around – they’re shaped like eggs, they don’t use wood in their cabinets and they use a single drive unit to cover the whole frequency range. Such is the company’s creativity, we could highlight any of these things here, but let's concentrate on the clever way Eclipse’s engineers have reduced cabinet colouration.

The main source of vibration in a speaker is the drive unit. As it moves, a lot of mechanical energy is generated, particularly with larger drivers. In almost all speakers, that drive unit is rigidly mounted into the cabinet, usually by multiple bolts, and so that vibration is fed directly into the cabinet, causing it to resonate. When a cabinet vibrates, it makes a sound that adds to that produced by the drive unit. That’s distortion you just don’t want.

Eclipse’s solution is clever. The drive unit is mounted directly to a grounding anchor, which connects directly to the speaker’s base. This way, any vibration generated by the drive units is fed straight into a high mass structure, then down into the speaker stand. The cabinet is merely a cover that is air-sealed at the drive unit edge but decoupled from arms that come out from the anchor. Touch the enclosure when the speakers are playing loud and it’s easy to feel just how little vibration is felt.

If you’ve tried to write with a pen on a moving vehicle, you’ll know just how hard external vibration makes that task. While less obvious, such unwanted mechanical energy makes the job of electronic components harder too.

It’s why many audiophiles spend thousands on equipment supports to get the best from their hi-fi. Most manufacturers make some attempt to reduce the amount of vibration reaching the internal circuitry of its components. The majority only go as far as fitting rubber feet or damping the casework, but others, such as Naim, take things more seriously.

Look inside the company’s range-topping ND555 music streamer and you'll see the main circuit boards are isolated from the substantial casework with a spring-loaded suspension. This is specially tuned to keep the unwanted mechanical energy pick-up by the casework away from the sensitive audio circuits. Just remember to fit the transit bolts before you move the unit, otherwise, the boards could become dislodged.

In a perfect world, you'd be able to put a speaker wherever you like in your room and it would sound the same. In reality, reflections from the walls affect the in-room frequency response of the speaker to a large degree, particularly at low frequencies where energy levels are high.

This is why it’s critical to position most speakers away from walls or room corners to get the optimum sound from them – unless they are designed to go into those places.

Kii Audio’s Three speaker takes a sledgehammer to the problem by combining sophisticated digital signal processing, active operation and an array of six drivers. Four of those are bass units – there’s one on each side with the remaining two on the back panel. This formidable collection of technology allows Kii’s engineers to control the way bass disperses into the room. They can shape the waveform so that some of the energy travels towards the rear and sidewalls. This makes the speakers remarkably unfussy about where they’re placed in a room.

While we may have had slight misgivings about the speaker’s sonic character, there can be no denying the cleverness of the company’s approach and success in accomplishing the task at hand.

Most hi-fi turntables use belt drive technology, and for good reason. It’s a great way to isolate the platter from any vibrations generated by the motor. But there’s a big problem, and that’s speed instability.

That same belt that isolates also stretches and contracts while transmitting drive to the platter. This constant changing of length results in issues with both low and high frequency speed stability. The main alternative drive method, direct drive, where the platter is mounted directly on the motor, is better at maintaining speed accuracy, though of course, feeds motor noise directly into the platter too.

We like the isolation of belt drive, but not its speed stability. Vertere Acoustics’ answer is to allow the motor body to swivel a controlled amount in order to compensate for the misbehavior of the belt. It’s a brilliant solution that gives the company’s products a rare amount of sonic stability and rhythmic precision for belt-drive designs.

Vertere’s owner also co-founded Roksan, and his original turntable design, the Roksan Xerxes from the 1980s, first had this motor arrangement. The mechanism used in the Vertere MG-1 Mk II deck is a more evolved version of that original design.