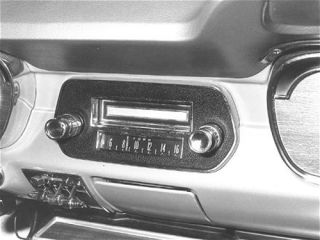 We're seeing more and more collaborations between audio and car manufacturers, but there was a time when having sound in your car was quite the novel experience. In-car audio came from humble beginnings but now flourishes as tech improves.

So, join us as we head back in time to find out some of the milestones that defined how we listen to music on the move...

In 1922, George Frost – the 18-year-old president of Chicago's Lane High School Radio Club – fitted a radio to the passenger door of a Ford Model T (like the one above). It's since been credited as the first ever "car radio".

It's a little hard to pin down the first radio made specifically for cars, but the Automobile Radio Corporation's $150 Philco Transitone is a popular candidate. And to put its cost into context, a Model T cost $650 back in 1927...

Galvin Manufacturing Company was behind the first mass produced car radio, with the 5T71 costing $110-130. It proved popular, so the firm took the "motor" and "Victrola" to form a new company name in recognition – Motorola.

FM may have been first patented in 1933, but it was AM radio that ruled the airwaves. It wasn't until 1952 when German firm Blaupunkt introduced the first AM/FM head unit for in-car use that the tide started to turn in FM's favour.

A year after FM made its way into the car, Becker – another German firm – unveiled the Mexico. According to some, it was the first premium in-car radio – with much owed to its pioneering automatic station search capability.

Chrysler was the first car maker to think you might like to listen to your own music in the car. So it introduced an in-car phonograph as an option in 1956. But the lack of content and playback issues meant it didn't really take off.

A problem with the in-car record player was the likelihood of scratching and jumping as you drove along. But we still wanted to listen to our own music, so a solution was found in the shape of the eight-track player – introduced by Ford in 1965.

(Photo via A Journal Of Musical Things)

Becker had already claimed one in-car audio first and grabbed a second in 1968 with the Europa – the first car stereo. Front and rear speakers had one channel each, until the left and right format appeared soon after.

With its smaller size compared to the eight-track, the cassette always seemed destined to prove popular as an in-car option. Add to that an "auto-reverse" function that let you concentrate on the driving and you've got a winner...

(Photo via A Journal Of Musical Things)

... or did we speak too soon? Pioneer launched the first ever in-car CD player in 1984, although Sony is also credited with that feat. In 1985, Mercedes-Benz became the first to offer a factory installed Becker CD player.

The cassette had arguably stood up quite well to the challenge posed by the advent of CDs, but it had little answer to the digital revolution. The first in-dash MP3 player came to the market thanks to Empeg in the late 1990s.

Online music streaming has transformed how we listen to music to such a point that we no longer need to own it ourselves. Is streaming the next step for cars? BMW and Rara think so, and the German firm has recruited Napster too.

At CES this year we saw Panasonic and Mini Cooper attempt to recreate the sound of Abbey Road inside a car. It's only at the concept stage but the car is another example of audio experts getting excited by in-car audio.

With the likes of Bang & Olufsen, Bowers and Wilkins, Dynaudio and Naim working alongside some of the most illustrious names in motoring, we're sure there will be plenty more in-car audio milestones to come...