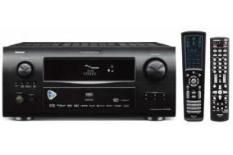 Superb, but Onkyo’s TX-SR875 gets close sonically. Too close

Denon's new AVR-4308 isn't one to hide its light under a bushel. Just take a look at that flap on its front panel: we've never seen a fascia more crowded with logos.

What that warpaint clearly highlights is the AVR-4308's complexity. Calling it a mere home cinema receiver doesn't really do it justice: it's more of a multimedia hub that happens to perform a home cinema function.

An example? Let's say you want to listen to the radio: you can choose from AM, RDS FM, DAB or, so long as you've got broadband, Internet Radio, the latter offering access to thousands of stations all over the world.

And, since the Denon has integral Wi-Fi, you don't even need to make a wired connection to your router: it'll automatically seek out your home network for you.

But what if you prefer to use discs to store your tunes? No problem: you can choose from CD, HDCD, SACD and DVD-Audio; alternatively, if digitally compressed music is your bag, the Denon supports AAC, FLAC, MP3, WAV and WMA files, and has both iPod dock and USB ins. It even meets the DLNA (Digital Living Network Alliance) spec, so it will play music from any suitable PC or network server, such as a Network Attached Storage box.

Dream menus
Clearly, all this flexibility could intimidate the unwary, but the AVR-4308 is easier to use than you'd expect, thanks to its fabulous new on-screen menus, complete with gorgeous icons and clear text instructions: it's not only intuitive to navigate, it's also a positive pleasure to use.

Naturally, the AVR-4308 will decode everything in modern multichannel movie sound, including high-definition audio formats. It also sports video conversion and upscaling (up to 1080p), automatic speaker calibration and equalization, powerful amplification and enough sockets for any conceivable installation, including three multiroom zones.

That's all the bases covered: let's talk sonic turkey. HD audio sounds best, of course: the uncompressed PCM audio of Flags Of Our Fathers sounds monstrous, its midrange dynamics rendered with as much savagery as we've heard.

The crashing muzzle reports of artillery are about as ‘real' as we'd like these things to get, and like all the best surround receivers, the Denon can also shift the boundaries of your listening room, giving you the acoustic sense of a higher, wider, more cinematic space.

A musical mixed bag
Music, meanwhile, is more of a mixed bag. Running in Pure Direct, with all of its video circuitry switched off and its tone controls bypassed, the Denon is able enough, if a little leaden of foot. Of course, lower-quality compressed music sounds less enjoyable, although the AVR-4308's Restorer function – which can be activated for iPod, USB and network audio – is worth experimenting with.

Summing a product like this up isn't easy. It's a great receiver in many ways, and if you can afford one, it's well worth your consideration. Our concern is that, good as it sounds, it doesn't deliver a significant sonic improvement over Onkyo's £1000 TX-SR875.

Yes, the Denon is more flexible, and yes, it's better to use – the issue is that it's also twice as expensive. If you consider that premium worth spending, then fine: however, we can't help feeling that, good as it is, the AVR-4308 is about £500 too expensive.