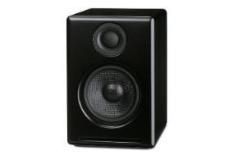 Far from charmless (and a video output is always welcome), but the iX5 needs to rein in that bass to get near the fifth star

Not, as we first fondly imagined, an organisation of immature swans, Cygnett-Unison is instead a speaker company with a burgeoning range of iPod-related accessories and a growing presence in Britain's department stores.

The shiny iX5 system is intended to raise the firm's profile and shine a light on the rest of its range.

And, if build quality and finish is anything to go by, Cygnett-Unison shouldn't have too many problems making itself known.

The iX5 is a contemporary looker, a red rag to the greasy-fingered – and almost exactly the same as the Audioengine A5s in terms of dimensions.

iPod dock is separate
The C-U system is slightly more complicated than its rivals, though, inasmuch as it uses a separate iPod dock which, as well as the active right-hand speaker, requires plugging into the mains.

Otherwise, it's business as usual. The active speaker is home to 20 watts per channel of amplification, stereo RCA inputs and a 3.5mm socket.

The RCAs are used to accept a signal from the battery-charging iPod dock – the dock also has an S-Video output for use with a monitor.

The right-hand speaker powers its left-hand partner via a supplied cable, terminated at both end with a 6.3mm plug – so upgrading speaker cable is less straightforward here than with the other four models on test.

A big, punchy sound
With the system set up and ready to go, you have a rather unusual situation where you have three shots at adjusting volume levels. Take your pick from the controls on the iPod dock, those on the right-hand speaker, or those on the supplied remote control.

Get a volume level that suits you, and the iX5 churns out a forthright, punchy sound – a lossless copy of Elbow's One Day Like This is a full-scale blowout in the Cygnett-Unisons' hands.

For all the breadth and dynamism of the performance, though, there's a shortage of fine detail to the iX5's sound that's only partially down to the overconfident low-frequency reproduction.

Switch to a 128kbps file of Tom Waits' Books of Moses and the C-Us' tendency to overstate the bottom end to the detriment of, well, everything else becomes even more apparent.

The C-Us do their best work when positioned on speaker stands, they're pretty unruly on a desktop.