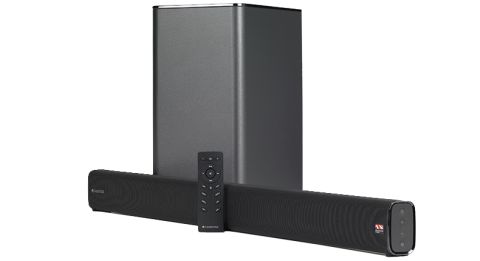 Over the past few years, Cambridge Audio has found a comfort zone in soundbases – its TV2, TV5 and Minx TV have all achieved five-star fame, collecting two Awards between them.

So it’s not surprising that the British company has the confidence to have a crack at a soundbar. Say hello to the TVB2.

Previously, our only criticisms of the company’s soundbases have been centred on their basic remote controls and the absence of HDMI connections, although the latter is becoming a common trend in TV audio solutions.

But neither is a burden of the TVB2. Its remote is smaller and thicker than the one supplied with its soundbases, with an attractive brushed look and a button for almost every operation, including each individual input.

Volume buttons have moved from bottom to top and now feel more natural – just be careful not to press the power button in between them.

Not only are there three HDMI inputs joining single optical and analogue sockets, but one HDMI is an ARC connection too – for your Blu-ray player, games console or set-top box to plug directly into the bar, with only one HDMI cable running (from the bar) into your TV.

The task handed to Cambridge Audio’s engineers was to produce ‘one of the most discreet’ soundbars on the market, but ‘without giving anything away in terms of sound quality and power’.

It’s as space economical and TV-friendly as we’ve seen a soundbar/sub combo. Given the task of conjuring up a discreet, efficient package in your mind, you may come up with what Cambridge offers here.

The 88cm soundbar nicely fits a 42in TV and, at only 7cm tall, shouldn’t block the screen if sat in front of it.

It’s stylish too, smartly dressed in a wraparound metal mesh grille – much like the Philips HTL5140 – with just a small ‘Cambridge’ badge for decoration.

A clear text display flashes through when input, volume or EQ are changed, turning off after a few seconds to minimise disruption. Everything is well integrated and out of sight.

On one end are push controls to change volume and input, and on the other an NFC sticker, which you tap for instant Bluetooth pairing with any compatible smartphone.

Our only design complaint is that the connections are side-facing within two deep-seated panels, so plugging cables in is a bit tricky.

None of the TVB2’s four EQ modes – TV, Music, Film and Voice – need to be avoided, although ‘Music’ is our first pick for its strict balance and clarity. ‘Voice’ pushes vocals forward slightly, which may be preferable for chat shows or comedy.

The Cambridge offers a big step-up in weight and solidity over a TV’s speakers. Easy on the ears, its clear, neutrally-balanced presentation is one you can slip into (and hear the benefits of) right away.

While the film’s background music is easy to tune out of through bog-standard TV speakers, the TVB2 gives it meaning and purpose, bringing it more into the story.

The good news extends across the frequencies. Switch to Whiplash on Blu-ray and treble is on the comfortable side of sharp, crashing cymbals sounding substantial and detailed.

There’s plenty of low-end weight, punch and precision delivered out of that subwoofer – something the TVB2 scores over the single-unit Q Acoustics Media 4 (£330), our two-time (and current) Award winner.

The strength with which the drums are being hit is reflected in the sound, and pianos come into their own with weight aplenty and harmonics intact.

Subwoofer levels can be adjusted in increments (-6 to 6); but we don’t feel the need to bump it either way.

Integration between the bar and box is seamless, and the soundstage is watertight – if not the largest. You don’t get the breadth of sound or quite the enveloping experience that the wider-girthed Q Acoustics delivers, so a really large screen telly might not be the Cambridge’s best accomplice.

Its rival defends its class-leading position with more expression and dynamic subtlety too. J.K Simmons’ shouting in Whiplash sounds like an assault ­– the fury in his voice is better communicated, adding an element of drama that the TVB2 cannot.

Cambridge Audio hasn’t yet floored the budget soundbar market as it has the soundbase one. But the company has stuck to what it knows and has done a good job with the TVB2.

It’s lovely looking, flexible to position and nails the basics well enough to be heralded as a huge TV audio upgrade. If the Q Acoustics’ trapezoidal build isn’t for you, here is a good substitute.

See all our Cambridge Audio news and reviews