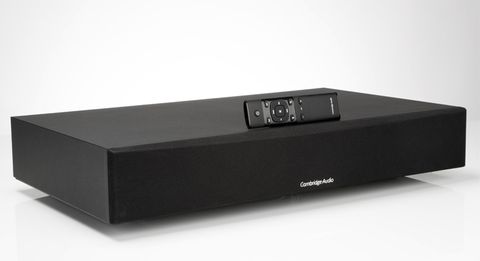 Best soundbase up to £300, Awards 2014. Still a good option for those short on space, but there are now better budget rivals

For a small box, the Cambridge Audio TV2 offers an impressive amount of sound. After all, it didn’t win a What Hi-Fi? Award for nothing.

But the sub-£300 soundbase market has changed a lot since last year – not so much with new entries, but with previously pricier products that have lowered their asking prices.

All of a sudden, the £100 gap between this and its bigger brother, the TV5, has turned into a £50 one, and that takes the shine from the TV2 somewhat.

Alternatives are one thing, but let’s pay the TV2 its dues – for £200, it’ll transform your TV’s sound and not take up too much room in the process. It’s tuned very similarly to the TV5 too, with a character that is rich, balanced and decently detailed.

The bass is weighty enough to bring added depth and definition to big-action scenes, and there is plenty of clarity in the midrange, allowing dialogue to push through the mix loud and clear.

That said, the TV5 sounds noticeably larger and more authoritative, and the TV2 lacks the same punch in the low end. During the hospital-bombing scene in The Hunger Games: Mockingjay Part 1, the impact of the bombs and falling bricks isn’t as punctuated as it is on the TV5.

That’s understandable considering the TV2 is one bass drive unit down on the larger TV5, but we’d now be very tempted to spend the extra £50 to get the added weight in the low end.

There’s plenty of detail though, and it’s decently dynamic for its price, with the ability to move sound convincingly throughout its stereo image.

The treble can verge on brightness, though, even after you’ve tweaked the various EQ settings, and as a tower under fire from the Capitol crashes into Katniss and Gale’s hideout, the sound of the glass windows smashing has an unnaturally sharp edge to it – something that’s more noticeable at higher volume, and better balanced in the TV5.

A word on those settings; we find the ‘music’ mode gives the most balanced delivery, but the ‘film’ mode does bring added bass and openness that can add excitement to the movie experience.

At £200, you don’t get many bells and whistles here – but then simplicity is half the TV2’s beauty. Connections are kept to a minimum, namely a pair of analogue inputs, an optical in and a 3.5mm jack.

Some rivals are more flexible, but for those using their TV as their HDMI switcher this selection, along with aptX Bluetooth connectivity, will probably be ample.

The design is relatively simple – a matt-black finish and cloth grille plus a colour-changing LED that illuminates to register commands.

We’d quite like a full display, but as there aren’t a huge amount of features to scroll through it’s not a deal breaker.

As the smaller sibling, the TV2 is meant for smaller sets – Cambridge Audio says the base mustn’t be wider than 55cm, nor deeper than 30cm or weigh more than 30kg. Of course, if you have a rack you can always put it there.

Cambridge Audio expanded its prolific catalogue of hi-fi and home cinema products with the brilliant Minx TV last year, and its successor is further proof that the company knows what it’s doing in the burgeoning, budget soundbase market.

The TV2 is an affordable product that ticks all the criteria of a good TV sound-booster: a full-bodied, detailed sound, smart style, and practical build.

Are we still blubbing at the Minx TV’s demise? Not so much.