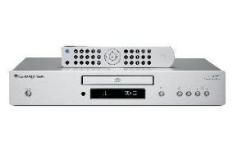 It's still a worthy addition to your kit, but it's been ousted from the top slot by its peers

Having picked up a well-deserved five-star review in previous tests, the Azur 650C now finds itself with one star missing – and it's not due to a shortage of red ink.

Why? Well, the Azur 650C hasn't become a bad player overnight. The problem stems from the fact that its peers have now raised the benchmark at this price point. Time to give you the low down on the Azur 650C.

Opt for the Cambridge machine and you'll be buying the most eager and determined player out there.

Whatever track you spin, the 650C seems determined for you to enjoy it thanks to its pacey, driven delivery.

Feed it the John Williams' Flight to Neverland track, taken from the film Hook, and the player runs with it, creating a hugely entertaining and lively sound, packed with detail and bursting with energy.

At times, you wish that the player could show a little more composure and finesse, but if it's enthusiasm and a large-scale sound at you crave, then the 650C doesn't hold back.

Weighty bass with fine rhythm
Switch to a track that's equipped with a more demanding beat, such as Notorious BIG's I Love The Dough, and the Cambridge player fires out weighty, deep bass.

Low frequencies maintain a fine sense of rhythm while focused, expressive vocals come at you from the expansive soundstage.

The loading drawer's smooth action is a reassuring touch and adds to the sense of occasion every time you want to change disc.

Even the remote control feels like a quality item and is much more substantial than anything you'll find supplied by other manufacturers.

The only criticism of it that we can come up with is the sheer number of buttons your thumb has to flit between.

The 650C is still a fine player, but when it comes to outright ability, it can now be bettered by the likes of the Marantz CD6003.