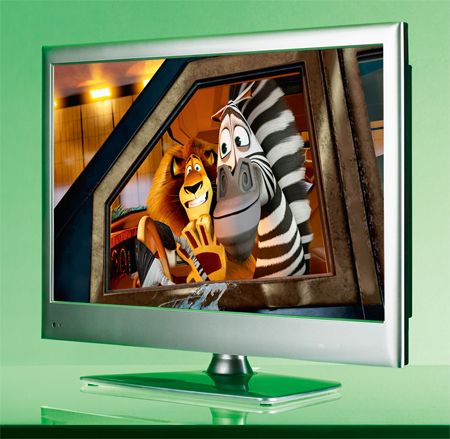 A decent enough option if money and space are tight

You can’t really argue with the price: a Full HD set with an integrated DVD player for £130 is a mighty tempting proposition. That's exactly what this Alba 22in Combi offers.

True, you don’t get the features you’ll find on some of the pricier sets, and connections are limited to a single input each for HDMI, Scart, composite and USB, but to ask for more at this price would just smack of greed. The makers have put the connections vertically, so you plug cables in from the bottom – a thoughtful nod to those who'll be mounting their sets on a bedroom or kitchen wall.

After setting up with a THX Optimizer Blu-ray (a quick, expletive-free process despite the comprehensive controls on offer) we got the ball rolling with BBC’s Homes Under the Hammer via the standard-def Freeview tuner. Believe it or not, this is a great tester for tellies thanks to the variety of patterns, textures and colours you find in people's houses. Our trial episode didn’t disappoint: a particularly gaudy room put the Alba thoroughly through its paces.

Alba 22in Combi: Picture quality
Immediately we notice that there isn't much in the way of contrast available, which does hamper things somewhat. It means black areas don't display an awful lot of detail, while whites are on the dirty side. Playing with the settings didn't help much, either, with highlights either becoming blown or darks simply closing in on themselves to solid black.

Flesh tones are fair, but there’s a definite sweet-spot with the colour settings: too low and it’s anaemic, too high and it’s Suntan City.

Alba 22in Combi: DVD player
Time to test that built-in DVD player. It's a tray-loading design, which pops out of the side of the TV. These units can add considerable depth to a television, but the Alba is still reasonably svelte.

With a copy of the remastered Star Wars Episode IV: A New Hope spinning, the picture improves quite markedly over that dug up by the Freeview tuner. Contrast is better, colours are more natural and whites are cleaner. It isn't a jaw-dropping performance, and dedicated players will be better defined overall, but for what it is we've no real complaints.

This is a Full HD set, so we step up again to Blu-ray, with the frenetic Isle of Man motorcycle racing doc TT: Closer To The Edge via a Sony BDP-S390. It’s the same story as with DVD, but with the added quality that Blu-ray brings. There's some motion instability (we wouldn't go so far as to call it judder), but overall it's a pretty decent, if not jaw-droppingly crisp, performance.

Alba 22in Combi: Sound quality
In the audio arena, though, things are pretty woeful. We don't expect brilliant sound from a flatscreen, but even by those standards, we'd want better than the tinny, bass-free sound we get here. TVs like this are almost always used without external speakers, so there has to be at least some nod to decent quality.

VerdictOverall, then, the Alba is a nearly-there piece of kit. As we said at the top, you really can't gripe too much at this price – and don't get us wrong: if money is tight it has a lot going for it. But if you can spare a bit more, or don't need a built-in DVD player, there's better out there.