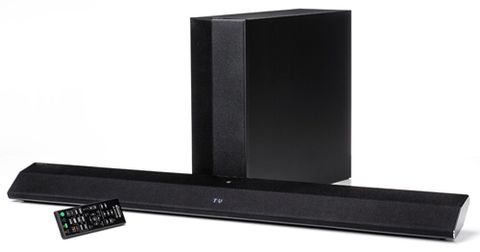 A step forward for Sony’s soundbars, but not the huge stride we were hoping for

Sony was late onto the soundbar scene, but has moved quickly. We weren’t impressed by the first Sony soundbar we reviewed – the HT-ST3 – earlier this year, so can it change our minds with the HT-CT370?

This model is based on the earlier HT-CT260 soundbar, but this time mounts a speaker diffuser on top of the drive units to help control sound dispersion.

The subwoofer has also undergone tweaks to improve audio stability, and added an extra magnet for more powerful bass too.

First impressions are good. Available in black or silver, the HT-CT370 is a classy-looking, compact soundbar.

It’s diamond-shaped in profile and has a silky cloth grille hiding its two 6cm drivers. A central LED text display is bold and easily readable.

The unit lies almost flat (at just a 25-degree angle) though, so the upward-facing display can be difficult to read from afar at seated level.

The front-facing wireless sub, which also has a two-sided sloped frontage, is slim and tall – albeit deep – making it fairly easy to accommodate. We propped it up near our TV stand, although it lay happily horizontally underneath the TV too.

Set-up is easy. With 3.5mm, optical and three HDMI inputs, as well as an HDMI output, you’re spoiled for choice with connections.

Bluetooth with near-field connectivity (NFC) makes wireless streaming possible with the press of a button too. Buttons on top of the unit can initiate Bluetooth pairing, as well as flick between sources, power on/off and control volume.

You will probably want to use the supplied remote control, though. It’s orderly, with a neat bottom section of buttons dedicated to Bluetooth controls.

It can double as your TV controller as well, if you have a Sony set. Alternatively, Sony’s free iOS and Android SongPal control app come in handy here too.

We start our test with Thor: The Dark World (the HT-CT370 decodes Dolby TrueHD audio as well as DTS-HD Master Audio).

There’s tight integration between the soundbar and sub (the sub wirelessly and automatically connects to the main unit, so all it needs is plugging in to the mains).

It isn’t shy either: bass is impressively deep. If you want drama, the HT-CT370 offers plenty.

‘Movie’ mode delivers even more bass, but it’s overkill. There are plenty of EQ settings: ‘Music’ gives an even sound and adds body to the midrange, while ‘Gaming’ boosts treble. ‘Night’ flattens dynamics so you don’t annoy the neighbours.

‘P.Audio’ (or ‘Portable Audio’) is our favourite, though, as it delivers the most convincing balance. Sony incorporates its own ‘surround’ technology, designed to expand the soundfield.

It works well enough, but it just doesn’t have the room-filling ability of the similarly priced Yamaha YSP-1400.

It also has a hard, thin delivery. A treble-edged sound may make action scenes intense and dramatic, but it isn’t easy on the ears. We pine for a fuller sound with more warmth, solidity and subtlety.

When we spin Toy Story 3, the familiar voices are clear and direct, but lack warmth and weight behind them, as well as the subtlety needed to bring out their different nuances.

We play Jamiroquai’s Virtual Insanity over Bluetooth and that thinness manifests itself again: cymbals are bright and the drums have a sharp edge.

It’s not offensive on the ear, but you want more from your music.

Sony’s design and features lay a good foundation for a promising mid-price soundbar, but its performance lets the HT-CT370 down.

An improvement on the previous Sony soundbar, then, but it still leaves us wanting more.