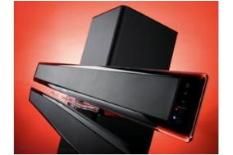 Pretty looks isn't all. The Heptones said that and, bless them, they were really on to something.

Whereas many soundbars have uninspiring looks, but considerably more appealing performance, here's Samsung's HT-WS1G, which flatters to deceive.

It's undoubtedly a more retailer-friendly proposition, thanks to the soundbar's slim silhouette and the subwoofer's gesture towards a curved cabinet and partially glossy finish.

It's a wireless sub, so finding it a suitable position in the room is simple – even if the need to hide it away isn't that pressing.

Simple specification
A single digital optical input is accompanied by a 3.5mm analogue input, and that's about it as far as specification goes.

The remote control is small and useable, the soundbar sits on a clear foot to further reduce the impression of visual bulk and there are some swish touch-sensitive controls on the bar should you need to operate it that way. Home entertainment systems don't come any simpler than this.

Decoding the Dolby Digital soundtrack to the imperious Goodfellas, the Samsung initially impresses with the sheer scale of its delivery.

Sonic shortcomings
While sounding suitably widescreen, the HT-WS1G also generates appreciable height to its soundstage, too; so while you're never authentically surrounded by sound, there's a presentation far, far larger than your TV's cabinet emanating from a narrow bar positioned just below your television.

However, it doesn't take much of a listen for the sheer scale of the audio to be overwhelmed by its specific shortcomings.

The Samsung has little authority or control over the soundstage it generates, and the upshot of this is a noticeable lack of focus and detail when it churns out a movie soundtrack.

A lack of integration
But more vexatious than this lack of rigour is the estrangement of the system's subwoofer. It doesn't integrate well with the soundbar at all, and even when outputting at its lowest level, low frequencies are overstated.

There's also lack of focus and grip to performance, a disinclination to describe leading edges with authority and a dire lack of tonal variation.

So while the HT-WS1G is a mightily attractive alternative on your retailer's shelf, and can be found a fair bit cheaper than the price we're quoting, it can't begin to put its money where its mouth is.

Unless you absolutely, positively must have a soundbar to match the finish of your Samsung LCD TV, this is a product best avoided.