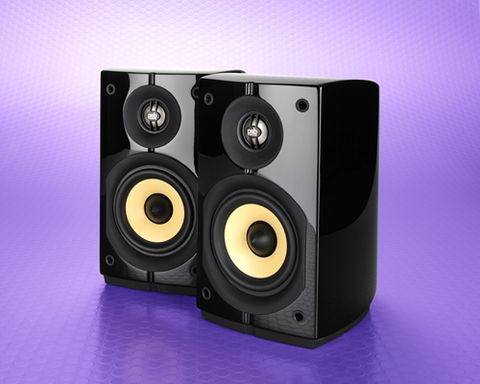 These are miniature heroes. If your space is tight, give them a try

Aww, aren’t they cute? You may not be able to tell from the picture just how small they are, but the PSB Imagine Minis are tiny.

At only 23cm tall, they’re a lot smaller than the dimensions we generally expect for the money. Then again, it’s all in the name.

We don’t get speakers from PSB very often. It’s a Canadian brand and we’ve not played with their speakers for over a year.

They must have different laws of physics in Canada because the scale of the sound here is at considerable odds with the size of the cabinets.

The soundstage is expansive enough to challenge others at this price without being dwarfed. It’s an airy presentation.

Instruments and vocals are given space to perform, and stereo imaging is fairly accurate. If we didn’t know better, we’d have assumed from listening alone that the cabinets were twice their size.

There’s also a surprising amount of weight to their delivery. Heavy testers from Lorde and Massive Attack yield a satisfying amount of heft, and we don’t even feel the need to qualify that with ‘for their size’.

Granted, these speakers don’t get near the punch of the Bowers & Wilkins 685 S2s or Monitor Audio Silver 1s, but we’re not left wanting.

When it comes to detail, the PSBs aren’t quite the last word in definition and subtlety, but nonetheless they are precise enough to provide a tangible sense of texture.

They also stay composed: there’s no attempt to overcompensate by out-shouting the competition. You won’t find the same effortless volume you get from larger cabinets, but nonetheless it is possible to crank it up a bit while maintaining a sense of control.

The chink in the PSBs’ otherwise surprisingly shiny armour is dynamics. This is the one area where the speakers struggle.

Play anything with a bit of kick, like Eminem’s The Way I Am, and it’s not hard to hear there’s not as much of an impact as that achieved by some of the larger speakers.

That said, it’s not terrible – and this is even less of an issue if you use the speakers in a smaller room.

Watch out for the speaker terminals, which are more than a little awkward in placement. They are under the speakers, pointing downwards, and there’s no space underneath.

The location of the terminals means it’s impossible to use banana plugs in the conventional manner unless you get the custom speaker stands or wall mount.

To get around this, you can use two holes at the back, through which you’re clearly supposed to thread bare wires (or thin banana plugs).

As these are smaller speakers, you’ll want to get as much out of them as you can. The best way to do this is to keep them close to the wall – we’d say no more than a foot away.

That will give you a fuller, more substantial sound, and best of all you don’t need to worry about the bass getting overwhelming.

These speakers are not without flaws, and in terms of outright quality you could buy better for the money.

But they are nevertheless likable, capable standmounters that will do very well if you have a smaller listening room.

Factor in the space-saving convenience, stylish design and hefty build, and they are a tasty little treat.