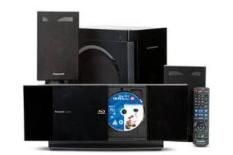 A decent system, but considering its price-tag we'd expect it to perform slightly better

Following Blu-ray's emergence as the next-gen movie format, Blu-ray-in-a-box systems, such as the Panasonic SC-BTX70, have become an increasingly common sight.

Prices vary from entry-level to high-end and the SC-BTX70 sits somewhere in-between. The main unit stands upright, with a sliding panel concealing the disc-loading bay and adjacent iPod dock.

The 'BTX70 is Profile 2.0-enabled and comes with a couple of optical digital inputs and an Ethernet connection that allows you to tap into Panasonic's Viera Cast online content portal.

Granted, the sound field in the climactic shootout to Mr & Mrs Smith appears wider, but it sounds brighter and less cohesive than it does with virtual surround turned off.

The subwoofer and satellites integrate well, even though the bass box looks like it was pieced together in an arts and craft class.

When it comes to the crunch, if you're specifically after a 2.1 system there are cheaper options out there.

Or you could buy a complete 5.1 system such as Panasonic's SC-BT200 that gives near enough identical picture performance and more immersive surround sound for less money.

See all our Blu-ray home cinema in a box reviews