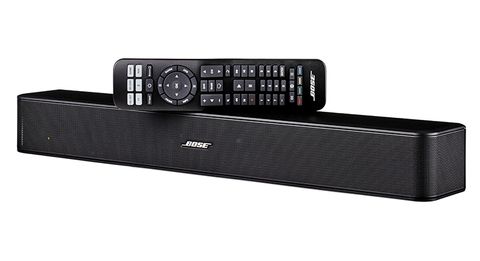 Its small size will appeal to some, but even at this price, we want more from it in the performance stakes

At just 55cm long and 7cm tall, it has to be one of the most compact soundbars we’ve ever seen. This makes it perfect for those who need something low profile enough to slip under their main TV, or are looking to boost the sound of a smaller bedroom TV perhaps.

But its size brings its own challenges too, and while we’re all for good things coming in small packages, here it feels like it could well be its shortcoming.

The Solo 5 keeps things pretty simple from a design perspective, with the aim of sitting underneath your TV (or wall mounted if you prefer) without much fuss.

There are no buttons or switches to complicate things, just a plain black grille to the front and black plastic to the top and sides, which helps to keep it light, while still feeling well built.

Behind the grille lie just two drivers, positioned in the centre of the unit and angled out slightly in an aim to deliver a wider soundfield. A couple of LED status indicators illuminate and change colour to let you know when certain features are enabled, plus they’ll also blink in acknowledgement as you change volume.

You control the soundbar using the rather substantial remote, which at about half the size of the soundbar itself feels a little on the chunky side.

However, that’s because as well as working with the soundbar, it can also be programmed as a universal remote for your TV, Blu-ray player and any other infrared device.

In terms of connectivity, Bose delivers what we’d expect at this price, including optical, coaxial and auxiliary inputs, plus built-in Bluetooth for streaming music.

It offers a few neat tricks too, such as its auto-wake feature, which will see the soundbar jump to life whenever it picks up an audio signal. It’ll power off automatically too, after 60 minutes of inactivity.

Other than that, Bose keeps things relatively straightforward. There aren’t stacks of sound modes, EQ options or settings to choose from – it’s designed to be plug and play, and it in that respect, it largely succeeds.

We connect it using the optical cable included in the box (the recommended connection, though a coaxial cable is also included) and the Bose Solo 5 is good to go.

The only thing you’ll want to check is that your TV speakers are turned off – you should find that option somewhere in your TV’s sound settings.

Unfortunately the dimensions of the Bose Solo 5 work against it as soon as you start listening.

The size of your TV will impact how much of a difference it’s able to make though, and it is worth bearing in mind that a small TV is likely to benefit more from the Solo 5 than a larger one.

We hook it up to a 32in Samsung set and settle in with Gravity on Blu-ray. Immediately the Solo 5 lays its cards on the table, dialling up the volume to a decent level, and adding clarity and weight compared with the TV’s native sound.

Voices are projected better and with good clarity (so much so that we didn’t feel the need to use the included dialogue mode), and the overall presentation has more body and solidity to it, avoiding the thin, hard sound that many slim TVs tend to have. The midrange is focused and direct, with a controlled, crisp treble.

Look deeper than that, though, and there’s little more to it. Sure, there is better weight on offer than most TVs can muster, but bass is still lacking in absolute terms.

This means that when it comes to giving any sense of punch or impact to big explosions or action scenes, the Solo 5 falls short. There is a bass boost option, which can help the low end sound a little more substantial, but it also sacrifices some midrange clarity.

Even with bass boost turned on, we still find ourselves wanting more, and though there’s additional weight, it still lacks any real presence.

It underwhelms elsewhere too. There’s not significantly more detail on offer than what your TV manages on its own, and it falls flat dynamically, lacking the ability to build any sort of tension or excitement with soundtracks.

The positioning of the drivers in the middle of the bar shows as well, creating a narrow soundfield that is so much smaller than the wide, room-filling sound you’ll get from the likes of the Philips HTL5140.

As for music, we select the Bluetooth icon on the remote and pair to the Solo 5 without issue. Streams from Spotify are delivered with decent clarity and solidity, but they carry the same character as movies.

Detail falls short, bass could be harder hitting and it needs to be better dynamically to be truly engaging.

Overall the Bose Solo 5 is a simplistic soundbar that ultimately achieves its two main aims – to boost your TV’s sound and look good while doing so.

The problem is that it doesn’t add a great deal more to the experience outside of that. It has more talented competition, which might not match its dimensions and convenience, but blow it out of the water when it comes to performance.

If you’re looking for a dinky soundbar to add a touch of weight and clarity to a smaller TV in your house, you might want to take a look. For anything more substantial than that, you can do better elsewhere.