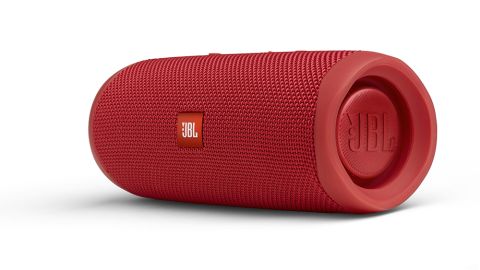 If all you want is a portable Bluetooth speaker that sounds as good as £100 can currently buy, you’ll be hard-pressed to better the JBL Flip 5

Bluetooth speakers have never been more prevalent in our homes or at social gatherings. Driver-bearing cylinders, oblongs and cuboids now jump from concept, to factory lines, to our laps with increasing regularity – and ever more impressive spec sheets.

So we’re surprised to discover that JBL’s Flip 5 arrives with fewer features than its predecessor, the Flip 4. Gone is the analogue aux-in port for wired listening, for example. That’s not a huge issue – wireless is clearly the way forward in 2020 – but JBL has also axed the microphone that was used for voice control and hands-free calls.

That makes the Flip 5 essentially just a Bluetooth (4.2) speaker – albeit one with a USB-C charging port and cable. This port helps lower the charging time to just 2.5 hours from flat to fully juiced. That's an hour quicker than the Flip 4 despite the Flip 5's battery being much bigger (4800mAh compared to 3000mAh).

Interestingly, though, the extra juice doesn’t lend any more stamina to the new model – battery life stays at a claimed 12 hours.

The Flip 5 is marginally bigger and heavier than its elder sibling, but we hardly notice the difference. The new racetrack-shaped driver hiding under its jacket is 4mm wider in diameter – 44mm from 40mm – and the Flip 5 also features 20W of amplification, so you also get an extra 4W of power over the Flip 4.

Battery life Up to 12 hours

JBL claims the Flip 5 is waterproof to an IPX7 rating. This means you should be able to submerge it in water at a depth of one metre for 30 minutes. There’s no cover for the USB-C charging port and though it is waterproofed, it isn’t tested against salt or sand ingress at the beach.

We test the JBL’s resolve by filling our sink with water and submerging the unit for a few minutes. Music plays throughout and it soon dries off when we take it out. Nothing has been compromised and all is well.

Although JBL claims you can stand the Flip 5 on one of its ends or lie it lengthways for listening, when placed upright it doesn’t stand entirely vertical. For testing, we place it in landscape mode so that both passive bass radiators are open to the elements.

The Flip 5 scores highly for portability, and once resting in our palm, the wrist strap slips comfortably over our hand and the buttons feel easily accessible.

Aside from a light-indicator to denote charging next to the Flip 5’s only port, there are light-up power and Bluetooth buttons along its rubberised spine, plus a play/pause button, volume controls and a PartyBoost button on top of the casing.

On our dark blue model, these four black, unlit buttons are somewhat difficult to locate in fading light, especially if the Flip 5 isn’t resting in our hands – perhaps not ideal for a quick volume adjustment, but it’s a minor issue.

Through the JBL Connect app, pressing the PartyBoost button on the Flip 5 helps you pair two PartyBoost-enabled speakers to create a stereo pair, or to link over 100 PartyBoost-compatible speakers in mono. This is not the same as the Connect+ button seen on the Flip 4, Charge 4 and older JBL Bluetooth speakers.

Want to connect the Flip 4 and Flip 5 in stereo or mono mode? Unfortunately, that’s not possible – and there are no plans to update older models to support the newer PartyBoost function via a firmware update. The options for linking the Flip 5, then, are currently limited to more Flip 5s or the Pulse 4; a stumbling block for those who already own one or more JBL speakers they want to partner.

The app itself is otherwise a simple affair, with no scope for treble or bass alterations, although you can rename your Flip 5 if you’d like. So, with the aux-in port and mic removed and a slightly bigger new driver, we are wondering whether the focus of the JBL Flip 5 has been more on sound performance.

We start listening to Fontaines DC’s Too Real on Tidal from our iPhone 7. Pairing is a breeze, and the connection never falters. Grian Chatten’s vocal comes in centrally amid the tight, pounding bass drum, agile driving electric bass riff and expansive guitar chords. For a speaker slightly smaller than the Ultimate Ears Boom 3, it’s an impressively weighty performance through the bass.

Post-punk is one of the tougher genres we could have selected, and yet all musical strands are held competently in check, from the manic high hat to the angry bass to Chatten’s vocal in Big, which is given admirable due diligence, quality and texture.

Throughout Sha Sha Sha we become aware of the Flip 5’s ability not just to relay the material it’s given, but also to layer and celebrate it. During the bridge of the track, the guitar solo and accompanying reverb are given ample space to shine through the treble and midrange, but not at the expense of the zealous bass.

The gentle piano that pre-empts Neil Young’s 2009-remastered vocal in After The Gold Rush feels both three-dimensional and emotive. Once the French horn joins in, there’s a real sense of openness, acoustics and placement on offer that the Award-winning Ultimate Ears Wonderboom 2 can’t quite match – though the latter is slightly cheaper.

Moving to Stormzy’s Heavy Is The Head album, the spoken, breathy request at the start of Big Michael comes through with both excitement and remarkable detail. When Stormzy retorts, we feel the intensity and disdain in his well-chosen words. The album continues to Audacity, where the Flip 5 confirms it can handle a bass-heavy rap track seemingly without exertion. The Flip 5 is better than the competition – and, remember, that competition is Award-winning.

It may be low on added extras, but the Flip 5 gets away with it. The solid sonic chops JBL has managed to deliver at this level simply cannot be denied.