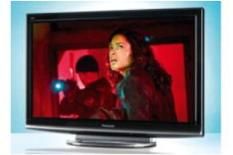 Panasonic fans might appreciate the simplicity of the ’G15, but it’s outclassed by test rivals

It's fair to say this generation of Panasonic TVs has had a bit of a rough ride, with model after model garnering lukewarm verdicts. We're sorry to say that the TX-P42G15B continues the trend.

It does kick off with a rather exciting specification, though. It boasts not only Freesat, but 600Hz sub-field drive motion processing, internet connectivity and network streaming via its ethernet socket, as well as four HDMIs.

It's one of Panasonic's high-end NeoPDP plasma panels, too.

Impressive black levels
That panel certainly has its benefits. Play The Hurt Locker on Blu-ray and its recreation of blacks lends extra foreboding to the night-drenched streets of Iraq as the soldiers search for bombs.

The Pana's insight means we see virtually everything, and when they open fire, muzzle flashes are realistically bright and punchy.

It's not all good news, though. Even on the ‘cool' setting, colours are warmer than they should be, with a touch of pink to whites tones.

Generally speaking, this isn't unpleasant, but on occasion it can add an unnatural vividness to skin tones. The other disappointment is that its 600Hz processing makes so little difference to motion: it's decent, but not as stable as the best we've seen.

Detail levels are marginally lower than the best when playing a Blu-ray, but the gap widens when you switch to standard-definition DVD.

The characters and sets of Funny People look a touch on the soft side, especially in comparison leading rivals.

Having said that, the picture is certainly clean and stable, and black levels continue to impress.

Respectable tuners
When it comes to the Freesat and Freeview tuners, the result is as we'd expect: there's not much to choose between the two.

A little extra control alongside HD content will ensure those with a satellite will opt for Freesat, but both tuners are respectable, if a bit over-exposed in the colours when pushed.

Like the rest of the performance, the Panasonic's sound is reasonable, if unexciting. And, that's the best way to sum this TV up: it won't annoy you, but it won't excite you too much, either.

Panasonic fans will be hoping the company's next generation puts them back among the class leaders.