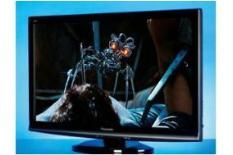 The TX-L37G15 is the only LCD in Panasonic's premium G15 range – its 42- and 46in siblings are plasmas – but otherwise it shares the same high-end spec, including Viera Cast.

We've already seen the latter built into Panasonic's new Blu-ray players, but this is the first TV we've seen packing the internet-enabled technology, which allows you to access multimedia content from providers such as YouTube, Eurosport and photo-sharing site Picasa.

Viera Cast is as a neat, user-friendly feature, but we obviously wouldn't position features above picture and sound quality… both of which we have to say are extremely impressive here.

The 'L37G15 is fitted with Freeview and Freesat tuners. Both perform to a strong standard.

The switch to Freesat results in a picture with marginally greater edge definition and less noise. High-definition channels from BBC and ITV look resplendent.

Champions League football on ITV HD appears pristine with awesome clarity and depth to the picture. The motion of the players and the ball itself is solid and consistent for the full 90 minutes.

Edge definition throughout Valkyrie is crisp and precise. The set paints a detailed picture, with virtually no trace of judder, even in high-octane scenes.

Match the screen's resolution with Blu-ray's 1080p pictures and the 'L37G15 puts in another strong showing as far as motion handling, realism and detail are concerned.

The panning scenes from Hancock that others may struggles to control are gripped firmly by this set. Black levels could be a touch deeper, but this is a minor criticism of a very accomplished all-rounder.

Even sound quality can't be ridiculed – the Panasonic's solid, open delivery outshines most of its rivals.

Freesat might still be in its early infancy, but if you're seriously considering the commitment, this TV could very well be a deal-clincher.