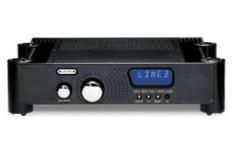 The last time we had a listen to this Chord pre-amplifier we were disappointed. Back in October 2007 ithe preamp was comprehensively outshone by its partner, the excellent SPM 1050 power amplifier: despite impressive detail resolution and agility, it didn't deliver the solidity or dynamic punch we were expecting from a product at this price. Three stars, we said.

Some minor tweaks
So what's new here? Well, Chord has taken another look at the internals of the '3000 and made some changes, increasing the gain and – in the process – improving the signal-to-noise ratio. Unchanged are the four balanced inputs and two standard unbalanced, the AV Bypass mode and the overall feeling of quality and precision in the build.

So, have these relatively minor-sounding tweaks done the trick? Well, the simple answer to that question would have to be yes. The CPA 3000 sounds livelier than before – and dynamically it is clearly more expressive. The authority in the bass has also improved, giving a greater solidity to the overall sound.

We'd still like a firmer punch to the midrange and greater rhythmic drive, but the CPA 3000 is now a more appealing product.