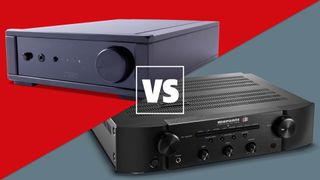 So prolific are Rega and Marantz in the world of stereo amplification that there are multiple price points at which we could pit their models against one another. That said, no battle would be quite so closely fought as the one between their budget offerings, the Marantz PM6006 UK Edition and the Rega io.

The former is a 2018 and 2019 What Hi-Fi? Award-winning sensation, while the latter is a relative newcomer fresh from a five-star review. But despite their age difference, both deserve to occupy the top two places on 'My First Amplifier' wishlists.

The question is, which order should they sit? We're here to walk you through the pros and cons of each so you can decide which would suit you better – the simplicity and energy of the Rega, or the inclusivity and refinement of the Marantz?

The most obvious difference, and perhaps biggest deciding factor, between the two boxes is in their connectivity.

The Rega keeps it simple, offering two pairs of line-level inputs to accommodate, for example, a CD player or music streamer; a MM phono input for hooking up a turntable; and a front-panel 3.5mm jack for listening through headphones. That analogue-only offering may satisfy someone with a modest system of budget hi-fi components, of course.

If you're looking for a more versatile hub, however, the Marantz is a more fruitful, offering, especially in the context of a budget stereo amplifier. It sports five analogue line-ins (one of which is a phono), a coaxial and two optical digital inputs, a tape loop for recording, and a front-facing 6.3mm headphone jack. Rounding off the comprehensive list are outputs accommodating two pairs of speakers.

Quantity isn't everything of course – in most cases, the majority of the Marantz's sockets would go unused at any one time. But the optical inputs especially can be handy for connecting up a TV. Driving two pairs of speakers – a pair each in two rooms, for example – will no doubt appeal to some, too.

Neither the Marantz nor the Rega has a USB input or Bluetooth, although the latter can always be added to either with a dedicated Bluetooth receiver such as the iFi Zen Blue. If you want integrated Bluetooth, then you're looking at the pricier Audiolab 6000A or Cambridge Audio CXA61 (which also has a USB input).

This may be a case of old vs new, but both the Marantz and Rega should please fans of traditionalist designs.

The Rega opts for comparative simplicity, with an aluminium half-width chassis, low-key front panel and plastic power and input buttons. It is solidly made and smart enough to be on show in a hi-fi rack.

The Marantz's full-width casing looks like many of its siblings, with a busy facade laden with buttons, knobs and a source selection banner giving it a sophisticated look. It's the sort of amplifier you can't see without reaching out for one of its dials.

Rega's Scandinavian minimalist approach makes it ideal for perching discretely on a shelf, while the more hefty Marantz is good for filling a shelf of a full-width rack.

The Rega and Marantz are two different beasts and that hits home when you hear them. While both are exceptionally good-performing entry-level amps that offer the finest performances you’ll get for this money, they take different sonic approaches.

The Marantz is a smooth performer; detailed, refined and musical. It's the sort of easy-listening presentation you could listen to for hours. It has the dynamic and rhythmic magnetism to pique one's attention, but its openness and refinement make it agreeable on the ears. It has a sonic maturity that is rare at this price.

The Rega is a cruder listen: comparatively, it doesn't have the Marantz's spaciousness or smoothness, but where the Marantz excels in those regards, the Rega replies with more energy and greater rhythmic assurance that makes it a more fun machine to listen to.

Playing Money In The Grave by Drake ft. Rick Ross, the Rega gets stuck in to the bassline and thrusts it and the vibrant vocals forward. Meanwhile, the Marantz is more laid back, choosing to convey the rap track with space and finesse.

Switch to Nick Cave and Warren Ellis's violin-led Texas Midlands (from the Hell Or High Water soundtrack), and it benefits from the Marantz's broader canvas and sweetness.

Both of these excellent budget stereo amplifiers are winners and, ultimately, your choice will come down to sonic preference and/or connectivity requirements. Like your music direct and upbeat and don't need digital sockets? Go for the Rega. Care for more subtlety and openness and would benefit from versatile features? The Marantz is the one for you.

The Marantz has fallen in price since it launched in 2018, meaning both amps can, at the time of writing, be picked up for around the same price. However, while all things are pretty square here, a successor to the Marantz is due shortly. We look forward to reviewing that in due course.