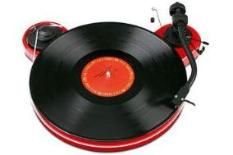 No company has done as much in the 21st century to bring the vinyl message to the people as Pro-Ject.

That alone is enough to grant the Czech specialists a place in our hearts, but the fact that its turntables have generally sounded splendid means we expect great things from the Genie 3.

Changes over the Genie 2 are subtle. This new player has a new motor and better motor stability, thanks to a reworked base.

The tone-arm is an upgraded S-shaped design, and initial quantities of the Genie 3 will be supplied with Ortofon's 2M Red cartridge before reverting to the more prosaic, but equally capable, Ortofon OM3E.

With a heavyweight pressing of Neil Young's Tonight's the Night spinning, the Genie 3 wastes no time in demonstrating why many people consider vinyl to be the most enjoyable of formats.

Competent across the frequencies
Low frequencies are warm and weighty, the midrange detailed, textured and alive with nuance, and treble sounds crisply substantial.

Timing is unforced and natural, integration first-rate and the soundstage explicit and simple to understand. There's a fluency to the presentation that a similarly priced CD player can't match.

Shortcomings? Only that the Genie 3 sounds absolutely as bright as you want it to, so some fairly careful system matching is in order. Other than that, though, the Genie 3 is a highly likable introduction to the delights of mid-20th century technology.