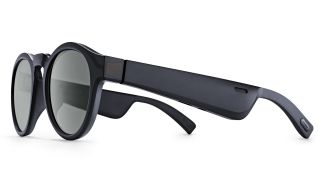 Bose has announced the release of a decidedly futuristic wearable named Frames: a pair of sunglasses with the world’s first ‘Audio Augmented Reality platform’ that’ll stream music and information, take and make calls, and access virtual assistants - all without the use of in-ear buds.

Effectively performing the same tasks as a pair of true wireless headphones, the Bose Frames incorporate a wafer-thin acoustic package set in the interior of each arm, to produce what Bose describes as discreet, jaw-dropping sound for the user and nobody else.

An ultra-small microphone and multi-function button are also embedded on the right temple, allowing the wearer to power their sunglasses on, pair with devices and cause passers-by grave concern when seemingly wittering on to nobody in particular.

They also feature what Bose is calling Audio AR, whereby Frames can tell where you are and what you’re facing courtesy of a nine-axis head motion sensor and the GPS from your smartphone. (Presumably this means you can wear them in the dark and keep from bumping into things.)

As for the glasses being glasses, Frames will be available in square and rounded shapes, with both blocking up to 99% of UVA/UVB rays, and they're scratch and shatter resistant. They also weigh just 45 grams.

Battery-wise, Bose says you can expect up to 3.5 hours of playback and up to 12 hours on standby, and they can be fully recharged in less than two hours via an included cable.

Bose is already taking pre-orders for Frames, which are available in January in the US, costing $199, with a global launch planned for springtime.

File this one under ‘news stories we never imagined we’d write’.