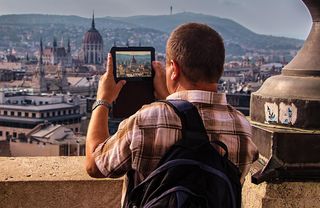 From the roaming backpacker to the corporate jetsetter, we've chosen 10 top tech gift ideas for the globetrotter in your life. And the best thing is that none of these presents will take up too much of your valuable packing space.

See them all: Christmas Gift Guide 2014

If you're looking for a smartphone that will serve as the perfect travelling companion, the LG G3 is a worthy candidate. It has a strong camera, supports high-res audio and puts in an amazing screen and video performance. A terrific handset.

It could well be the case that a smartphone just doesn't cut it, especially if you're thinking about music and video content on the move. With its lightweight, slim and portable build coupled with a tempting price, the Google Nexus 7 is a sure winner.

From your hotel room to a secluded beach, you might want to lift your travelling experience by bringing the tunes out to play. And with the Sony SRS-X3, you get an expansive performance to match. A hugely confident portable speaker.

Looking for a pair of headphones that'll drown out the sound of the plane, train or automobile as you travel to your destination? These Goldrings were superb value at their original testing price, but have since come down in cost – making them even better value!

For those long trips, you'll need something to keep you occupied (you can't always look out the window). Blinkbox Movies is the on-demand video service that will keep you up to speed with all the latest releases across a number of platforms.

The chances are that huge demands will be placed on batteries for the duration of any holiday – that means you'll be either looking for a plug or doing VERY well on rationing what you have left in the tank. With this universal adapter, you won't struggle to recharge your device in more than 150 countries. The USB ports will come in handy too.

The smartphone is running at less than 10 per cent and the night train still has an hour to go – what do you do? The QiStone+ aims to make sure there's no dilemma in such situations, with its 4000mAh capacity on hand to wirelessly charge any Qi-compatible handset. You can also charge a second device using the USB port.

For a handy storage solution that won't take up too much space, the knomo Balham Knomad is a two-fold organiser that fits an iPad Mini or other 8in tablet, smartphone, battery charger and a lot more inside. Its spray-coated canvas also helps to resist water and dirt.

For those heading off to colder climes, it'll be necessary (probably) to wrap up warm. But that can sometimes be an issue when using devices with touch screens. Fortunately, a solution is available – in the form of gloves that have special tips to ensure you needn't choose between warm fingers and the ability to choose that next song.

OK, so this might be something of a stretch... But if your travel plans some how depend on you taking some vinyl with you, there is a (fairly) portable option. This portable turntable with detachable speaker is a complete system for spinning your wax around the world.

See all our present ideas in the Christmas Gift Guide