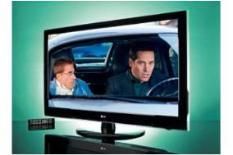 This is the first ‘passive' 3D TV we've seen – and given LG's announcement at CES that it will switch increasingly to passive 3D technology, it could be the first of many from the company.

With the rapid, re-emergence of 3D video, it was thought that the two technologies, passive and active-shutter, would remain separate. The former for pubs and clubs showing broadcast 3D content, the latter for those who wanted 3D at home.

But LG's decision changes the 3D landscape. Its research apparently shows that customers are put off by the high cost of active-shutter technology, so cheaper passive 3D sets have an appeal in these cash-strapped times.

Polarising glasses are cheaper
As current broadcast 3D content is in lower, interlaced resolution due to bandwidth restrictions, a passive system works fine if you're just watching something like Sky 3D.

For 3D Blu-rays however, delivering Full HD images to each eye in turn, the active system is thought
to be more capable – something we're testing here.

LG is the first company to eschew the pricey battery-powered glasses required for active TV sets in favour of cheap polarising specs here.

Looking at its specification, it's easy to think of this set as a commercial proposition for which an appearance on the consumer market is an afterthought.

But you will find four HDMI inputs, a USB 2.0 input with DivX support and TruMotion 200Hz processing. It looks smart too, and there's a fairly clean and clear remote control.

Less eyestrain with 3D
The lighter 3D glasses – there are four pairs supplied with this set – are undeniably more comfortable to wear and, in our experience, far less likely to cause the eyestrain over extended periods that some have experienced with active-shutter glasses.

But there's a trade-off for the budget glasses and comparative comfort: the 3D video this TV delivers doesn't offer the same sense of depth and perspective we've found with active sets, while the lower resolution means a softer, less detailed picture.

It's no disgrace, though – far from it: the 3D version of Cloudy with a Chance of Meatballs is still shown with plenty of insight and a decent sense of three-dimensionality, but it just doesn't have that 'wow' factor.

Switch to Blu-ray and, compared with similarly priced sets – 3D or not – this LG doesn't match the punch and vividness with bright colours.

No Freeview HD tuner
It's not only a slightly subdued palette; edges could be sharper and detail more thorough, and black levels don't pass muster. Standard-definition follows in a similar vein, though the Freeview tuner puts in a decent shift – but it's not HD.

Seen as a cost-effective 3D solution, this set won't actually save you much compared with active sets – and other 46/47in sets – on the market.

The glasses are far cheaper, but compared with active TVs, you'd be forgiven for thinking you've been diddled.