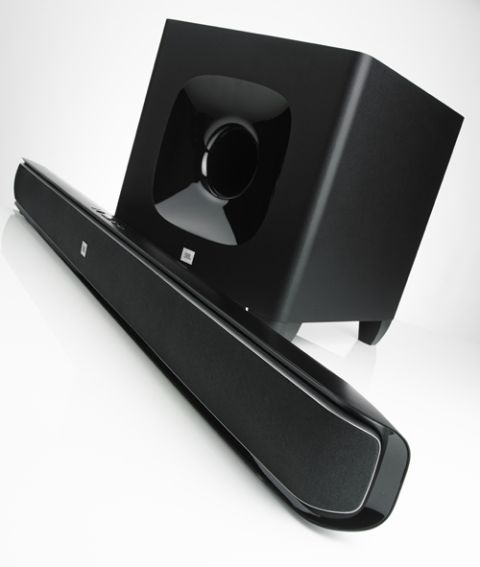 A good-looking, extremely capable soundbar solution, the JBL is a fine alternative to TV speakers

It’s obvious from its appearance that the JBL Cinema SB400 isn't just another 'me too' product. The main soundbar unit looks elegant and smartly tailored, with the speaker almost floating in its surround thanks to its contrasting silver edging.

The bar feels reassuringly heavy too – hardly surprising when you consider that behind the grille are six speakers, 120W of power and an arsenal of connections.

Then you’ve got the subwoofer. At 10.5kg and more 30cm cubed, this ported, powered unit packs in a 100W amplifier. It’s quite large, so you’ll need to clear a space by your kit stand to accommodate it.

A soundbar will never present the breadth of connectivity you would normally find on a proper surround sound receiver, but the JBL surprises with a number of options.

While some systems have just the one HDMI input, the JBL blesses you with three. One of these is ARC enabled for compatible TVs. An optical digital input and a 3.5mm auxiliary jack complete the offerings.

There are no indicators on the front of the soundbar – the JBL provides an on-screen display via HDMI. This is basic, but better than nothing. The top of the main unit hosts buttons for selecting input, activating the Bluetooth connectivity and switching between movie and music sound modes. They’re sensibly positioned, nice to use and help give the overall impression that the SB400 is a quality item.

Tucked away near the inputs is a switch that alters the soundbar’s equalisation for positioning on a table or wall – make sure it’s at the correct position as using the wall setting on a table does alter the sound for the worse.

MORE: Soundbar Supertest in our June isue, on sale now

The only thing missing is a lip-sync adjustment. During testing, the sound was a millisecond or two behind the picture on our Samsung TV, but was fine when we switched to a Panasonic set. This doesn’t necessarily mean it will be the same for all users, but it’s clearly worth checking with your own TV before you invest in the unit.

It’s a shame that the feel of the remote control isn’t in keeping with the rest of the system. The dinky rectangular wand seems like a token gesture. Basic controls are catered for, but it isn’t particularly nice to use.

The responsiveness of the main unit isn’t consistent with your presses either. There are individual buttons for each input, but there’s no button to switch it to Bluetooth mode and playing a track from your smartphone won’t force it into that mode either.

Powered up, the SB400 produces an open and spacious sound – the system won’t struggle to fill an average-sized living room. The subwoofer shows authority and poise. It rumbles merrily in the background adding to the atmospheric scenes of Inception, but it wastes no time powering into life when the action moves to the assault on the snow-covered mountainside fort. The JBL gives the viewer both barrels.

Switch to some streamed music over Bluetooth, and the bassline to Jay-Z’s Hard Knock Life rises and falls with good dynamics with leading edges well-defined. Harman provides its Display Surround technology for some virtual surround processing and there is a slight boost in the width of sound in this movie mode. The trade off for this extra expanse, though, is a slight loss of focus.

We’d prefer to stick with the system’s music setting for the added solidity. Listen to it this way and you’ve got yourself a good-looking and undoubtedly fine-sounding soundbar.