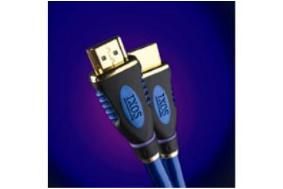 This cable is reasonable enough, but at this price there's better

Ixos's Studio XHT-228 which has the added attraction of Ethernet support for those who like that kind of thing.

We're more concerned with its other facets however, and when handling images in its workmanlike fashion there's sharpness and resolution aplenty, together with fairly smooth motion tracking, although we weren't so keen on the accompanying noise and blocking.

We weren't overly chuffed with the slightly anaemic contrast or the thin, narrow sound either; this is a cable in need of some serious heft, although it's nowhere near as poor-sounding as some cables at this price point.

Neither a class leader nor a basket case, once again Ixos has produced a supremely fair-to-middling cable. There's worse, but at this price there's better too.